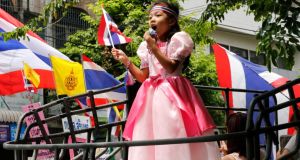 A young girl blows a whistle among the anti-government supporters joining the march of protest leader Suthep Thaugsuban after the Thai Constitutional Court ruled that caretaker prime minister Yingluck Shinawatra must step down in Bangkok today. Photograph: Barbara Walton/EPA

Thailand’s prime minister and part of her cabinet have been forced out of office by a court ruling finding her guilty in an abuse of power case, pushing the country deeper into political turmoil.

Yingluck Shinawatra was charged with abusing her authority by transferring a senior civil servant in 2011 to another position, and cabinet members in office at the time were found complicit in the decision.

The Constitutional Court ruled that the transfer was carried out with a “hidden agenda” to benefit her politically powerful family and therefore violated the constitution, an accusation she denied.

The ruling forces Yingluck and nine members of her caretaker cabinet from office. It was not immediately clear who would become the new acting caretaker prime minister.

Her supporters accuse the courts of toppling Yingluck through unfair use of the legal system after six months of anti-government protests failed to unseat her.

They have vowed to hold a major rally on Saturday, which many fear could spark violence.

The ruling was a victory for Yingluck’s opponents who for the past six months have been engaged in vociferous and sometimes violent street protests demanding she step down to make way for an interim unelected leader.

But it does little to resolve Thailand’s political crisis as it leaves the country in limbo. Since November, more than 20 have been killed and hundreds injured.

The ruling also casts doubt on whether new elections planned for July will take place.

It remains unclear whether her opponents will be able to achieve other key demands, including creating a reform council overseen by a leader of their choice who will carry out various steps to rid the country of corruption and what they say is money politics, including alleged vote-buying.

The campaign against Yingluck has been the latest chapter in Thailand’s political upheaval that began when her brother, Thaksin Shinawatra, was ousted by a 2006 military coup after protests accusing him of corruption, abuse of power and disrespect for constitutional monarch King Bhumibol Adulyadej.

Since then, Thaksin’s supporters and opponents have engaged in a power struggle that has on occasion turned bloody.