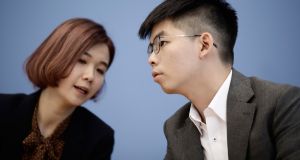 Visiting Berlin, Mr Wong spoke briefly with Germany’s foreign minister and was applauded at a Reichstag reception attended by senior politicians and cabinet members. China condemned the meeting with the minister as “disrespectful” of its sovereignty.

“Three decades ago, no one expected the Soviet Union would fall, no one predicted the Berlin Wall will fall,” said the 22-year-old at a press conference, occupying a seat usually occupied by chancellor Angela Merkel’s spokesman. “With our pressure and determination we just hope to let the world [be] aware that the Hong Kong people deserve democracy.”

The Reichstag reception was organised by the Bild tabloid newspaper, while the hall for government press conferences is not operated by the Merkel administration. But the blurring of boundaries in Berlin prompted a harsh reaction from Beijing.

Germany’s ambassador to China was summoned for talks at the foreign ministry, a sharp tool in the drawer of diplomatic displeasure. Ambassador Wu Ken in Berlin warned of a “very negative disturbance to the bilateral relationship”.

In China last week chancellor Angela Merkel urged a peaceful resolution of the standoff in Hong Kong. Upholding human rights – in general and in Hong Kong – was “indispensable” for Germany, the chancellor said. Berlin, she added, views the “one country, two systems” principle “as the right one”.

She declined to meet Mr Wong in Berlin on Wednesday, aware that the damage to the bilateral relationship had already been done.

Mr Wong, arrested last month for his role in the protests gripping Hong Kong, arrived late in Berlin after a brief detention in Hong Kong following confusion relating to the terms of his bail.

Mr Wong told his Berlin audience he had been arrested eight times and held in detention for 100 days since joining the pro-democracy “umbrella” protests in 2014.

He suggested that “the next time [the] EU makes trade negotiations with Beijing, they highlight China’s human rights violations”. Until then he urged Germany to stop selling China riot control equipment – in particular water cannons – deployed by police against protesters in Hong Kong.