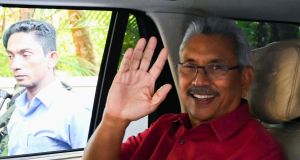 Sri Lanka’s president-elect Gotabaya Rajaaksa waves from inside his car as he leaves his house to go to the election commission office in Colombo Sunday. Photograph: Lakruwan Qanniarachchi/ /AFP via Getty Images

Mr Rajapaksa’s percentage of the vote was 52.25 per cent, above the 50 per cent plus one vote needed for victory.

The results showcased deep ethnic and religious polarisation in a country that has seen decades of conflicts and bloodshed since independence from the UK in 1948.

‘President of all citizens’

President-elect Mr Rajapaksa appeared to try to allay minority scepticism in his speech after the official announcement of results.

“Therefore I am well aware that I am bound to serve every Sri Lankan irrespective of race or religion.”

Mr Rajapaksa’s party headquarters in Colombo erupted with applause when the commissioner delivered the result on live TV.

His victory in Saturday’s vote marks the return of a family ousted from power in 2015 elections amid constant reports of nepotism, skimming off development deals with China and alleged human rights violations during the end of the decades-long war with the Tamil Tiger rebels in 2009.

“As we usher in a new journey for Sri Lanka, we must remember that all Sri Lankans are part of this journey. Let us rejoice peacefully, with dignity and discipline,” Mr Rajapaksa tweeted.

About 15 million people were eligible to vote, and Sri Lanka’s Election Commission estimated 80 per cent turnout after polls closed.

Flanked by Buddhist monks at campaign events, Mr Rajapaksa focused his message on Sri Lanka’s majority Sinhala Buddhist population, who comprise about 70 per cent of the island’s citizens. The second-largest group are ethnic Tamil Hindus at 12.6 per cent, while 10 per cent are Muslims and 8 per cent are Christian.

He accepted support from Buddhist nationalist clerics who demanded the resignation of Muslim Cabinet members and governors they said were interfering with the investigation of the Easter attacks.

The Muslim politicians temporarily stepped aside.

The campaign said Mr Rajapaksa’s swearing-in ceremony would take place at Anuradhapura, a city about 124 miles from Colombo and the seat of the first Sinhalese kingdom known for a sacred tree that is said to be the southern branch of the Bodhi tree in India under which Lord Buddha attained enlightenment.

“A Sinhala Buddhist theocratic state has been given a people’s mandate now,” he said.

Mr Premadasa swept the majority Tamil and Muslim districts in the country’s north and east, winning as much as 80 per cent of the vote. In majority ethnic Sinhala areas, Mr Gotabaya secured around 60 per cent.

Sinhala Buddhists’ votes usually do not vote as a bloc, unlike Sri Lankan minorities who have supported whatever party espoused policies comparatively favourable to them. – AP