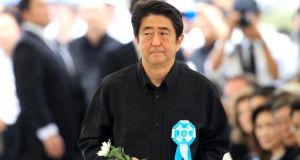 Japan’s prime minister Shinzo Abe walks towards a memorial to lay flowers for victims of the second World War Battle of Okinawa during a memorial service on Tuesday. Photograph: Hitoshi Maeshiro/EPA

Japan’s prime minister Shinzo Abe was heckled and jeered at a tense commemoration on Tuesday marking the 70th anniversary of the Battle of Okinawa.

Angry shouts of “Go home!” could be heard during a speech in which Mr Abe lamented the enormous price paid by Okinawans during the bloody three-month conflict.

Police arrested several men who tried to protest against the prime minister’s visit to the southern island as his motorcade drove to the memorial venue, according to media reports.

American troops invaded Okinawa in March 1945 at the end of the second World War, mounting an attack that left 223,000 Japanese Imperial Army soldiers and civilians dead – roughly a quarter of the local population. More than 50,000 US troops were killed or injured.

Thousands of Okinawans died in the crossfire. Indoctrinated by war time Japanese propaganda, many took their own lives rather than be captured by US troops.

The islands reverted to Japanese rule in 1972 but most of the US bases have stayed. Okinawans are angry that their tiny main island is still home to about three quarters of all American military facilities in Japan.

“This excessive burden continues to affect our lives and the development of Okinawa,” prefectural governor Takeshi Onaga told the crowd at Peace Memorial Park.

Mr Onaga condemned a controversial plan by Washington and Tokyo to build a new offshore airbase in the north of Okinawa’s main island. Many locals blame Abe for ignoring opposition to the facility, which polls suggests runs at 80 percent.

Mr Abe’s government says it is the only viable option to replace the ageing Futenma, a Marine air base that occupies the middle of Okinawa’s Ginowan city. Japan and the US agreed to close the facility two decades ago but local opposition has blocked the plan.

“The two governments are trying to build this base against the wishes of the people,” said Tomohiro Yara, a professor at Okinawa International University. “I want to ask Americans if it is right to ignore the principle of democracy here on Okinawa,” he told broadcaster NHK.

Survivors of the battle prayed at a marble memorial in the peace park, inscribed with the names of victims. “We can never go back to fighting wars,” said Michio Sakima, who curates a local museum dedicated to remembering the battle. “They are just too destructive.”

Mr Abe was jeered when he told the crowd he was “filled with pain and emotion” when he thought about “the countless sacrifices and fathomless blood and tears shed on this land”.

Okinawa wasn’t historically part of the nation until 1872 and locals blame the Japanese military command in Tokyo for using them as a buffer against an invasion by US military. Today, the American bases on an island hundreds of miles from the mainland mean that about 99 per cent of Japanese never need to face the consequences of the country’s half-century military alliance with Washington, or its central conundrum – a war-renouncing nation sheltering under the world’s largest nuclear umbrella.