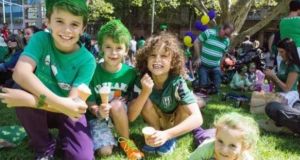 The organisers of Sydney’s St Patrick’s Day parade - held on the closest Sunday to March 17th - were relying on good weather after a storm ruined last year’s parade.

They got their wish, and 80,000 people turned out for what is the fourth largest St Patrick’s Day parade in the world after New York, Dublin and Boston.

“Thanks to the Irish Government and the Irish community in Sydney for getting us back on our feet again, the debt has been paid off, which is a considerable achievement,” said parade president John Roper.

In the first group to pass the viewing stand at Sydney’s Town Hall, marchers from each of Ireland’s counties held their respective county flags aloft, joined by people holding Australian and Aboriginal flags.

There were also Aboriginal dancers, along with schools of Irish dancers, each exuberantly expressing this year’s parade theme of “Celebrating life”.

Fresh from their successful return to the city’s Mardi Gras parade a week earlier, the Queer Irish group was well received, with parade announcer Gerry Faulkner saying “All of us Irish are queer anyway”.

After police, school and Scottish pipe bands, a Father Ted float featured many “nuns” and “lovely girls” who have day jobs as traffic controllers at building sites (an occupation dominated in Sydney by Irish women).

Not having a storm to contend with meant the marching Irish wolfhounds and red setters were in better form this year, as was everyone who headed to Hyde Park for the post-parade family day, where entertainment ranged from traditional music, to a U2 cover band, to Australian children’s entertainers Hi-5.

Also in Hyde Park, a tent was erected so that 61 Irish people could become Australian citizens – the biggest number yet to do so after the St Patrick’s Day parade in Sydney.

There were also parades in Brisbane (on Saturday) and Perth, and an Irish festival in Melbourne. Perth’s parade was lead by former Ireland soccer international Andy Keogh, who now plays for A-League team Perth Glory.

Prominent buildings in Sydney, Canberra, Melbourne and Perth are being bathed in green light to celebrate St Patrick’s Day and Australia’s Irish expats.