Following comments made by Prime Minister John Key, female members of the New Zealand parliament have been expelled from the chamber after sharing their experiences of sexual assault. Video: New Zealand Parliament TV 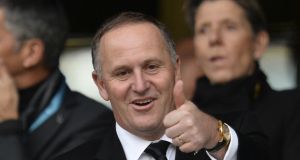 Several female MPs were ordered to leave the New Zealand parliament on Wednesday after their declarations that they had been victims of sexual assault were ruled out of order by the speaker.

The women’s intervention came after prime minister John Key on Tuesday accused opposition Labour and Green MPs of “backing the rapists” in a row over the detention of New Zealanders by the Australian government.

Opposition politicians had raised concerns in parliament over the detention of New Zealand citizens awaiting deportation after the Australian government cancelled visas for those convicted of certain crimes.

Mr Key went on a tirade after being questioned by Labour leader Andrew Little, telling Mr Little “you back the rapists”, before being cut off by the speaker, David Carter.

“These are the people that the Labour party are saying are more important to support than New Zealanders who deserve protecting when they come back here.”

Mr Key told Labour MP Kelvin Davis, who has said the detentions make a “mockery” of the Anzac relationship: “If you want to put yourself on the side of sex offenders, go ahead my son, but we’ll defend New Zealanders.”

An estimated three-quarters of Labour MPs walked out of parliament directly after Mr Key’s comments on Tuesday, along with several Green members.

Mr Key told the house and New Zealand media that he stood by his comments.

On Wednesday, Green party co-leader Metiria Turei told the speaker that as a survivor of sexual violence she was deeply offended by Mr Key’s remarks: “As the victim of a sexual assault, I take personal offence at the prime minister’s comments, and ask that you require him to withdraw and apologise.”

Her comments were echoed by Green MP Catherine Delahunty, who was told by the speaker to stop and sit back down.

When other female MPs, including Labour’s Nanaia Mahuta, Clare Curran and Megan Woods, along with Green MP Marama Davidson repeated the call for Mr Key to apologise with reference to their own assaults, Mr Carter ordered them to stop, saying they were “flouting the rules” by claiming to make points of order.

Mr Carter said he had not heard Mr Key’s comments clearly at the time and it was too late to demand an apology.

Despite the warning, MPs continued to stand to urge the speaker to take action.

Green MP Marama Davidson was then thrown out of the House, followed by Poto Williams. At least eight others then chose to leave the debating chamber.

They were joined by four male MPs, including Greens co-leader James Shaw, and are demanding Mr Key apologise for his comments.

Ms Delahunty said the MPs had walked out on behalf of women around New Zealand. “We’ve walked out because every woman in this country needs to know that women parliamentarians will not put up with this,” she said.

“We will not stand by and allow this to be bandied around parliament – this kind of abuse of people and way of approaching rape is simply unacceptable, and the prime minister has to be held to account.”

The MPs who walked out are being widely praised on social media and Wellington Rape Crisis said it supported the MPs’ action.