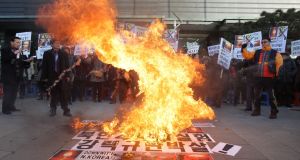 The United States called on China on Thursday to end its “business as usual” relationship with its ally North Korea after Pyongyang defied world powers by announcing it had tested a hydrogen bomb.

US secretary of state John Kerry said he made clear in a phone call with Chinese foreign minister Wang Yi his view that China’s approach to North Korea had failed.

“China had a particular approach that it wanted to make, that we agreed and respected to give them space to implement that,” Mr Kerry told reporters.

“Today in my conversation with the Chinese I made it very clear that has not worked and we cannot continue business as usual.”

China is the North’s main economic and diplomatic backer, although relations between the two Cold War allies have cooled in recent years.

The vast majority of North Korea’s business dealings are with China, which bought 90 per cent of the isolated country’s exports in 2013, according to data compiled by South Korea’s International Trade Association.

North Korea carried out a nuclear test on Wednesday, although the US government and weapons experts doubt Pyongyang’s assertion that the device it exploded was a hydrogen bomb.

The test angered China, which was not given prior notice.

US Republicans and Democrats in the House of Representatives could join forces in a rare display of unity to further tighten sanctions on North Korea.

Nancy Pelosi, the House Democratic leader, told reporters that Democrats would support a North Korea Bill likely to be brought for a vote by Republicans next week. A congressional source said it was expected as soon as Monday.

The legislation was passed by the House Foreign Affairs Committee last February, but was stalled until this week’s nuclear test.

The Bill would target banks facilitating North Korea’s nuclear programme and authorise freezing of US assets of those directly linked to illicit North Korean activities.

It would also penalise those involved in businesses providing North Korea with hard currency.

“We understand Republican leadership plans to move a Bill strengthening US sanctions on North Korea. That will have strong bipartisan support,” Ms Pelosi said, adding that “we will support it”.

It is unclear how more sanctions would deter North Korea from continuing on its maverick course. The state has paid little heed to international pressure, as evidenced by its conducting four nuclear tests since 2006.

The US and its ally South Korea have been limited in their military response to the North’s actions.

A South Korean military official told Reuters that Seoul and Washington had discussed the deployment of US strategic assets on the divided Korean peninsula, but declined to give further details.

A White House spokesman said there had been no talk with South Korea about any introduction of the so-called Terminal High Altitude Area Defense (THAAD) system, a move opposed by China.

“There have been no discussions or consultations with the South Koreans about the deployment of anti-ballistic missile capability,” spokesman Josh Earnest said.

The system has radars that can track multiple ballistic missiles up to 2,000km (1,200 miles) away, a range that would reach deep into China.