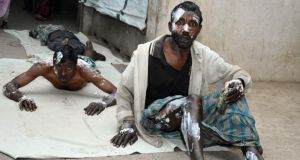 Bangladeshi residents who suffered burn injuries look on at a hospital after a petrol bomb attack on a bus in Gaibandha, some 285 km from Dhaka. Photograph: Quddis Alam/AFP/Getty Images

Attackers in Bangladesh have thrown crude fire bombs at a packed bus and a moving truck in two separate incidents, killing at least nine people and injuring 30.

The attacks were the latest violence in a nationwide transportation blockade called by the opposition to pressure prime minister Sheikh Hasina to resign and announce new elections.

The bus was attacked on Friday in northern Gaibandha district while it was travelling towards the capital, Dhaka, with a police escort, said police official Raziur Rahman. At least six people were killed and 30 injured in that incident.

Mr Rahman said the perpetrators fled and their identities are not known.

The injured are being treated for severe burns and the death toll could rise, said Abdul Kader Khan, a deputy director at Rangpur Medical College and Hospital.

In the other incident, a truck carrying poultry was attacked in southern Barisal district early on Saturday, killing the driver and two other people, said police official Sajjad Hossain.

The violence brought the death toll to 63 since the blockade started on January 6th.

Former prime minister Khaleda Zia, chief of the opposition Bangladesh Nationalist Party, has vowed to continue the blockade to unseat the government despite the deaths and calls from business leaders and Western diplomats to stop the action.

Ms Zia’s party and its partners boycotted elections last year after Mr Hasina refused to appoint a neutral government to monitor the voting.

Mr Hasina has now refused to sit down with the opposition, blaming it for the recent attacks, while Ms Zia says the government is behind the violence.