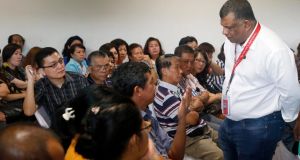 Bad luck is said to come in threes. For Malaysia’s aviation industry, that superstition looks perilously close to the truth. Flight QZ8501, which disappeared in the early hours of Sunday morning belonged to AirAsia Indonesia, a 49 per cent-owned affiliate of Malaysian budget carrier AirAsia.

Along with flight MH370, the Malaysia Airlines aircraft that mysteriously disappeared en route from Kuala Lumpur to Beijing in March, and MH17, shot down over eastern Ukraine in July, its disappearance spells the end of a disastrous year for the sector.

Other than the Malaysian connection, however, there is nothing obvious to link the three incidents, aviation experts say. One occurred because of an act of hostility over European airspace and another when the flight disappeared without trace after diverting radically from its intended flight path.

This week’s flight appears to have gone down in the Java Sea shortly after requesting a change of course to avoid bad weather. Radar contact until that moment suggests the wreckage ought to be much easier to find than that of MH370, which is still missing.

Aviation experts were quick to point out that despite the run of headline-grabbing accidents, airline safety has improved markedly in recent years.

Harro Ranter, head of Aviation Safety Network, an independent body that monitors flight safety, says 2014 has seen the fewest fatal accidents since modern aviation began after the second World War. Only eight large passenger aircraft have been lost this year, he says, compared with an average of 17 in each of the past 10 years. “That may contradict the feeling people have watching all these accidents, but the facts are the facts,” he adds.

Even in Asia, where both the number of passengers and the number of budget airlines has been growing rapidly, accidents are on a downward trend.

Figures released by the International Air Transport Association in September showed the accident rate in Asia-Pacific in the first nine months of 2014 was 2.2 per million flight segments, against 2.7 in each of the five years to 2013.

However, that number did not include MH17 on the grounds that the aircraft was shot down. The 2.2 Asia-Pacific figure was marginally higher than that for Europe, at 1.9, and North America at 1.3. The Middle East and Africa were more prone to accidents, with rates of 6.2 and 13.6 respectively.

The latest accident, however, is bound to raise questions about the rapid growth of international airline traffic in Asia, where passenger numbers have increased 5 per cent annually for years. This has put pressure on regulators and air traffic controllers, as well as on the ability of airlines to maintain aircraft properly and recruit well-trained pilots, industry experts say.

A senior Australian pilot with nearly 20 years’ experience flying in Asia says weather conditions on Sunday on the route from Surabaya to Singapore were not unusual and should not have caused an experienced pilot much difficulty.

He questions the ability of low-cost airlines, which account for more than half of capacity in most of southeast Asia, to train their pilots for contingencies, such as having to fly the aircraft manually if the autopilot malfunctions.

“Everyone wants to fly to Bali for the same cost as a taxi to the airport,” he says. “How can these airlines pay for training to a high standard?”

According to Ranter, “one of the concerns regarding the rapid growth of the industry in Asia has been pilot shortage.” However, he adds, the Indonesian pilot of the AirAsia had more than 20,000 hours’ flying experience, including more than 6,000 with AirAsia. “He was extremely experienced. That contradicts the idea of a rookie pilot.”

Indonesia has a poor air safety record and since 2007 many of its airlines have been barred from European airspace. One aviation analyst says the affiliate airlines of AirAsia, including the one in Indonesia, were run as “fairly siloed” operations.

However, he adds, their pilots receive instruction at AirAsia’s Malaysian training school. Until now, AirAsia, founded in 2001, has had an unblemished safety record. – Copyright The Financial Times Limited 2014