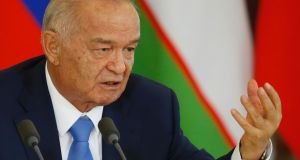 Uzbek president Islam Karimov is believed to have had a stroke. Some journalists citing reliable sources say he is dead and succession plans are secretly being made. Photograph: Maxim Shemetov/AFP/Getty Images

Since emerging from the ruins of the Soviet Union a quarter of a century ago, central Asian states have rarely, if ever, marked their sovereignty amid such uncertainty.

For the last 24 years, the independence day celebrations of Uzbekistan’s 30 million people have been led by Islam Karimov, who seamlessly became president after leading the republic’s ruling communist party from 1989-1991.

Officially, the dictator Karimov (78) is now in hospital recovering from a stroke suffered last weekend; but some journalists, citing reliable sources inside the tightly controlled Uzbek state, say he is dead and succession plans are secretly being made.

Whatever his condition, he will surely not attend Thursday’s Uzbek independence day celebrations, where he has customarily performed a traditional dance and reassured his people that all would be well while he was in power.

In neighbouring Kyrgyzstan, plans for Wednesday’s independence day events there were shaken today by a suicide car bomb attack on the Chinese embassy in the capital, Bishkek, which killed the driver and injured three embassy workers.

China’s foreign ministry called the bombing a “serious terrorist attack” and pledged that Beijing would “resolutely strike against all forms of terrorism”, comments which suggest the attack would be attributed to Islamist militants or Muslim Uighurs who oppose Beijing’s rule.

There is a real threat – thousands of central Asians are believed to have joined those groups and their allies – but it is also a pretext for egregious abuses of citizens’ rights and democracy, which in turn have fuelled extremism.

In Karimov’s stroke and the Kyrgyzstan bombing, two key questions for central Asia and world powers crystallise: what happens when the region’s veteran autocrats die, and can their highly personalised and deeply corrupt power structures tackle the threat of radical Islam? Like Karimov, Kazakh president Nursultan Nazarbayev has ruled since 1991; in Tajikistan, Imomali Rakhmon has held power since 1992; Kyrgyzstan has seen much more political change, some peaceful, some violent; and Turkmenistan’s two post-Soviet leaders have maintained bizarre and repressive personality cults.

All the so-called Stans have sought, to different degrees, to play off the rivalry of the US, Russia and China in a region of natural wealth and strategic importance, where major powers have been competing since the “Great Game” of the 19th century.

The US used airbases in Uzbekistan and Kyrgyzstan for its post-9/11 campaign in Afghanistan, and Karimov has continued to use his country’s geopolitical significance as a shield against criticism of his regime’s abuses.

Rights groups say Karimov’s security services operate a reign of terror and are guilty of everything from boiling detainees alive to massacring hundreds of demonstrators in 2005 in the city of Andijan, near the border with Kyrgyzstan.

Karimov’s officials claimed the Andizhan violence was triggered by Islamist extremists, and neither the bloodshed nor the subsequent cover-up prompted Washington to cut its ties – Uzbekistan still receives US aid, and US secretary of state John Kerry (and Russian president Vladimir Putin) have visited in the past year.

Uzbekistan, the most populous state in ex-Soviet Asia, gave birth to its most prominent radical group, the Islamic Movement of Uzbekistan, which has fought alongside the Taliban and Islamic State since its formation in the 1990s.

Kyrgyz officials claim that hundreds of the country’s citizens are fighting for Islamic State, also known as Isis, in Iraq and Syria, and Kazakhstan has accused Islamist radicals of attacks on its territory, including a shooting last month that killed three police officers and two civilians.

In Tajikistan, Rakhmon used Russian support to crush Islamist guerrillas in a 1992-1997 civil war, and has imposed tough laws in recent years to combat what he calls the rising danger of radicalisation.

How great a threat Islamic State represents to the region is still unclear; how Uzbekistan and its neighbours will cope without Karimov may become apparent very soon.