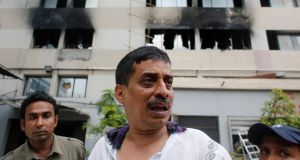 A company official stands in front of a factory belonging to Tung Hai Group, a large garment exporter, after a fire in Dhaka. Eight people were killed when the fire swept through the garment factory in an industrial district of the Bangladeshi capital Dhaka, police and an industry association official said today. Photograph: Andrew Biraj/Reuters

Eight people are known to have died following a fire at a clothing factory in Bangladesh as the death toll from last month’s fire at a multi-storey building housing five garment factories rose past 900.

The latest fire tore through an 11-storey building housing a garment factory and residential complex in the capital Dhaka, killing at least eight people including the factory’s managing director.

The fire raced through the lower floors of Tung Hai Sweater Factory — which had closed for the day — as well as apartments, fire officials said. The cause is not yet known.

The eight confirmed dead so far were found in a stairwell, apparently trying to flee the building.

They included the factory director Mahbubur Rahman, who was also a leading official with the powerful Bangladesh Garment Manufacturers and Exporters Association. A police official was also among the dead, according to fire officials.

It took more than three hours for firefighters to get control of the blaze, which began soon after the factory’s 300 workers had gone home for the day.

The country’s garment industry has been plagued by a series of disasters in recent months, including a November fire at the Tazreen factory that killed 112.

However, last month’s collapse of the eight-storey Rana Plaza building, which housed five garment factories, stands out as the worst tragedy in the history of the global garment manufacturing industry.

More than two weeks after the collapse, workers with cranes and other heavy equipment were still pulling apart the rubble and finding more bodies, and the death toll rose to 912 this morning, while it is unclear how many more people remain missing. More than 2,500 were rescued alive after the April 24th disaster.

A total of 648 bodies have so far been handed over to the families. Some of those who authorities have been unable to identify have been buried by the government.

About 100 decomposing bodies have been kept at a makeshift morgue at a local school ground and are to be sent to hospitals in Dhaka for DNA testing to identify them.

The European Union’s delegation to Bangladesh urged the government to “act immediately” to improve working conditions in the country’s multi-billion euro garment industry.

Abdul Latif Siddiqui, head of a special cabinet committee to inspect garment factories, formed days after the Rana Plaza collapse, said the government had closed 18 such factories in recent days for failing to meet work and safety standards. He did not say whether the closures were temporary or permanent.

Authorities also began disbursing salaries and other benefits to workers from the Rana Plaza factories, after they protested for compensation.

It said political tension was damaging confidence in Bangladesh, which has a rating below investment grade.

A general strike was called earlier this week by opposition political parties to protest at the deaths of at least 29 people during street demonstrations.

Investor confidence in Bangladesh also dropped after the factory disaster two weeks ago.

Moody’s says “continued political tensions are credit negative because they may further damage investor confidence in Bangladesh against the background of recurrent industrial disasters in the ready-made garment sector”.