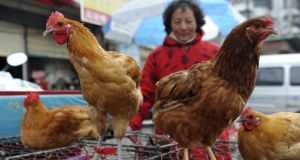 A chicken vendor at a market in Fuyang city, in central China’s Anhui province. Two Shanghai men have died from a lesser-known type of bird flu in the first known human deaths from the strain. Photograph: AP

Chinese health authorities have stepped up monitoring of avian flu after two men died in Shanghai from a strain of the virus that has not previously been passed to humans.

A 35-year-old woman in Chuzhou city, in the nearby province of Anhui, who became ill on March 9th, also contracted the H7N9 strain of bird flu and was in critical condition, China’s national health and family planning commission said in a report on its website.

There was no sign that any of the three, who were infected over the past two months, had contracted the disease from each other, and no sign of infection in the 88 people who had closest contact with them, the medical agency said.


All three became ill with coughs and fevers before developing pneumonia.

Commission experts said on Saturday the cause had been identified as H7N9, a strain of avian flu not thought to have been transmitted to humans before. There is no vaccine against the strain, the commission said, adding it was testing to assess its ability to infect humans.

Another strain of bird flu, H5N1, has led to more than 360 confirmed human deaths since 2003 and the deaths of tens of millions of birds.

The World Health Organisation said yesterday there was no evidence to show that H7N9 could be transmitted between people. The organisation said most avian flu viruses did not infect humans and the majority of H5N1 cases had been associated with contact with infected poultry.

“At this point, these three are isolated cases with no evidence of human-to-human transmission,” the organisation’s representative in China, Dr Michael O’Leary, said.

“A new virus tends to be more virulent in the beginning. Either it is going to become a truly human virus, in which case we have to start dealing with it regularly, or it is going to be primarily an animal virus with just a rare human case,” Mr O’Leary added.