Body of Danielle McLaughlin to be flown home next week

Repatriation fund of €30,000 raised to bring murder victim’s remains back to Donegal 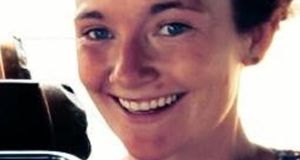 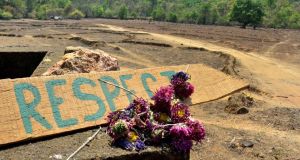 Artifacts placed by mourners at the location where Danielle McLaughlin’s body was found in Canacona, some 60km south of Panjim in the western Indian state of Goa. Photograph: AFP/Getty Images

The body of a Donegal woman killed in India earlier this week is expected to be flown home to Ireland early next week.

Danielle McLaughlin (28) from Buncrana was found severely beaten in a field at a tourist resort in Goa in the west of the country on Tuesday morning.

Local police officials say they believe she was raped and beaten to death by Vikat Bhagat, a 24-year-old local man she was seen walking with on CCTV footage the night before.

Mr Bhagat remains in police custody, and officials say he has already confessed to murder but is denying sexual assault charges.

A postmortem showed Ms McLaughlin died from cerebral damage and constriction of the neck.

A Northern Ireland-based repatriation trust is involved in organising the return of Ms McLaughlin’s remains to Ireland.

Colin Bell of the Kevin Bell Repatriation Trust told The Irish Times that paperwork was being completed in Goa, after which the body of the dual British and Irish passport-holder would be flown to Mumbai on Saturday ahead of an expected return to Ireland early next week.

Friends of Ms McLaughlin including Christy Duffy have raised more than €30,000 to help with the repatriation costs and to “give her the send-off she deserves”.

Accounts of Ms McLaughlin’s final hours have begun to emerge over recent days after 200 tourists and locals attended a candle-lit vigil close to where her body was found on Wednesday evening.

British nationals Dave Woodruff (37) and his friend Kate, who declined to have her second name published, told the Guardian they met Ms McLaughlin the evening before her murder, and that she referred to a group of nearby local men as friends.

Kate said Ms McLaughlin did not seem under duress. “When she wasn‘t speaking to Dave or the Indian guys, she was happy, she was dancing,” she said.

At about 9pm, Mr Woodruff, Kate and her partner agreed to go swimming. Mr Woodruff said he asked Ms McLaughlin to join them.

“She said: ‘Yeah, give me two minutes. I just need to talk to my friends,’” referring to the group of men. He said when he got out of the sea she had left the area, as had the group she was with.

1 Mary Lou has to call for the smelling salts as SF councillor deals a knock-out blow
2 Murdered and mutilated: Keane Mulready-Woods and the teenagers of gangland
3 Who was murdered teenager Keane Mulready-Woods?
4 Dublin gangland figures involved in Drogheda feud that killed 17-year-old
5 Murder inquiry after Cork student stabbed in neck at house party
Real news has value SUBSCRIBE