Concerns death toll will rise after study finds more than 360,000 died in China in 2013 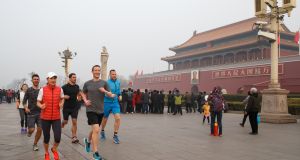 Beijing residents long used to hazardous smog were unsurprised by the findings in a new report showing that burning coal was the cause of 366,000 deaths in 2013, making it the worst cause of pollution-related deaths.

The report, which was carried out by China’s Tsinghua University and the US-based Health Effects Institute, also found deaths related to fine particulate matter known as PM2.5 – for which coal combustion is a major culprit and contributed to 916,000 premature deaths in China in 2013 – could rise by as much as 40 per cent to about 1.3 million by 2030.

For years one of the biggest signs of the onset of autumn was the delivery of coal bricks to the homes in the hutong laneways, a sight that is increasingly rare these days.

China is the world’s biggest consumer of coal, and although output fell in 2014 after 15 years of consecutive growth, coal still makes up 66 per cent of the country’s energy consumption.

Beijingers have developed a grim humour when it comes to dealing with pollution. Facebook founder Mark Zuckerberg raised a few smiles in March when he posted pictures of himself on Facebook (which is banned in China) jogging in Tiananmen Square, on a day when the air pollution reading was “hazardous”.

“To be honest, everyone in China already knows that most of the pollution is caused by coal-burning. But the coal industry is rich and powerful and they don’t seem to mind causing waste and pollution. Nor are they willing to spend more to make better processes to burn coal,” said one Beijing resident, Wang Ming.

But household solid fuel combustion, of both coal and biomass, is not far behind, and is responsible for 19 per cent of deaths from ambient pollution.

“Based on Chinese data, we found that outdoor air pollution was the fifth leading cause of premature death in China in 2013,” said Zhou Maigeng of the China Centre for Disease Control.

Shaking China’s dependence on coal is not going to be easy. A report by the environmental group Greenpeace in March showed the rate at which coal-fired power plants are being approved by governments in the provinces was alarmingly higher than in 2014.

Amid growing unhappiness with pollution among the general populace, President Xi Jinping has made combatting air pollution one of the pillars of his government’s policies, and he has signed up to international efforts to combat global warming.

The report gives the government credit for its efforts to cut emissions, and says that Beijing should continue to focus on cutting emissions in the industrial and domestic sectors.

“Because domestic combustion also leads to a large disease burden due to household air pollution exposure, reductions in domestic biomass and coal emissions would be particularly beneficial to public health,” the report said.

Even under the most stringent energy-use and pollution-control future scenario, coal will remain the single largest source contributor to ambient PM2.5 and health burden in 2030, it said.

“This finding highlights the urgent need for even more aggressive strategies to reduce emissions from coal combustion along with reductions in emissions from other sectors, strategies that are beginning to be incorporated in the Thirteenth Five-Year Plan,” it said.

One Beijing resident, Bei Chen, said that demographics were a factor, and this means that things will get worse before things get better, because of the size of the population and the fact that it is ageing rapidly.

The researchers also find that an ageing population will contribute to greater numbers of deaths, because the number of older Chinese with heart and lung diseases related to pollution will inevitably increase.