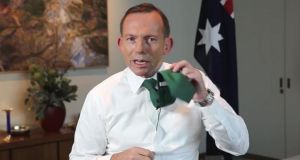 The Melbourne-based Irish Australian Chamber of Commerce and the Lansdowne Club in Sydney are both holding sold-out St Patrick’s Day business lunches on Friday, with close to 1,000 people attending each event, but Australian Mr Abbott is unable to attend either function.

Instead he has made a St Patrick’s Day message video which has been posted on the Liberal Party’s YouTube site.

An Irish businessman in Australia, who has seen the video, says the prime minister’s message is “patronising”.

“I would have hoped for a more business-focussed message in a video that was designed for business functions,” he said. “There are so many good stories of Irish people in business in Australia, Mr Abbott’s lack of awareness of any of that is astonishing.”

The prime minister, who has previously referred to climate change as “crap”, jokes in the video that “this is the one day of the year when it’s good to be green. As you can see I’ve got my green tie on for the occasion.”

Mr Abbott goes on to say of the foundation of Australia that: “It’s been said of us that the English made the laws, the Scots made the money and the Irish made the songs”.

“I’m sorry I can’t be there to share a Guinness or two, or maybe even three, but like you I do rejoice in St Patrick’s Day,” the prime minister concludes.

The video was supplied to both the Irish Australian Chamber of Commerce and the Lansdowne Club, but neither is playing it at their event.

“We understand that the prime minister’s video message is a generic St Patrick’s Day message, not intended for the corporate audience at our event, and on that basis it is not part of the event,” said Barry Corr, chief executive of the Irish Australian Chamber of Commerce.

The Lansdowne Club said it could not find a spot on its run sheet for the prime minister’s 70-second video.

Meanwhile, preparations for Perth’s St Patrick’s Day parade, which is scheduled for Sunday, have been thrown into controversy with the city’s branch of Cáirde Sinn Féin taking legal action over what it says is discrimination against it by the parade organisers.

The constitution of Perth St Patrick’s Festival specifies that it is non-political and non-sectarian. But Cáirde Sinn Féin says that as both Labour TD Alan Kelly and Australian Labor MP Alannah MacTiernan took part in last year’s parade, Sinn Féin should be allowed to take part in this year’s event.

“The team in Cáirde are stunned at the shoddy treatment by … the festival committee,” said Cáirde Sinn Féin president, James Donnelly. “We are a community group and all our activities speak for themselves.”

The Irish Times is seeking comment from the Perth St Patrick’s Festival committee.