Leaked document forecasts leaving will damage Britain in every scenario 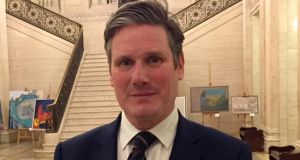 The British government has rejected a call from MPs to publish a leaked civil service report predicting the economic consequences of Brexit. The document, which was leaked to Buzzfeed, forecasts that leaving the European Union will damage economic growth, even if Britain secures a free trade deal after Brexit.

Brexit minister Steve Baker told the House of Commons that the report, which was drawn up by his own department, had not been approved by ministers.

“In fact, I saw this report myself only this morning. The analysis to which I believe this article refers is a preliminary attempt to improve on the flawed analysis around the EU referendum. It is there to test ideas and to design a viable framework for the analysis of our exit from the EU,” he said.

Mr Baker noted that the report assessed the impact of leaving the EU with a Norway-style deal, a free trade agreement and with no deal but did not consider the prospect of a bespoke deal, which Britain is seeking. Dismissing the report as an attempt to undermine Brexit, he suggested that economic forecasts were always wrong.

“I’m not able to name an accurate forecast, and I think they are always wrong and wrong for good reasons. My longstanding views on the flaws in the epistemology of the social sciences and consequences for econometrics are long set out,” he said.

Mr Baker said it would be wrong to publish an incomplete analysis now but promised MPs a full economic assessment before they vote on the final Brexit deal.

Labour’s shadow Brexit secretary Keir Starmer threatened to use an arcane parliamentary procedure to force the government to publish the report and three Conservatives joined opposition MPs in signing a letter calling for it to be released.

The row over the leaked report came as the House of Lords started debating the EU Withdrawal Bill, which repeals the legislation that brought Britain into the Common Market and transposes EU rules into British law. Theresa May’s government does not command a majority in the Lords and peers are expected to approve a number of amendments to the legislation.

Former Brexit minister Robert Bridges used his speech to launch a coruscating attack on the government’s handling of the negotiations.

“Four months on, and there are still no clear answers to these basic, critical questions. All we hear, day after day, are conflicting, confusing voices. If this continues, and ministers cannot agree among themselves on the future relationship the government wants, how can this prime minister possibly negotiate a clear, precise heads of terms for the future relationship with the EU.”