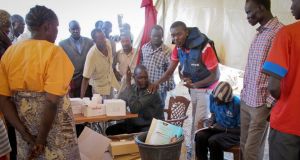 Displaced people taking shelter in the UN compound in Bentiu in December. A mass exodus of residents is under way in the city because of fears of an imminent battle between rebels and government troops. Photograph: AP Photo/UNMISS, Anna Adhikari

Thousands of people could be seen fleeing the city of Bentiu, one of the two main centres under rebel control, the BBC said. The South Sudanese army is believed to be about 16 miles (25km) away.

Bentiu is the capital of Unity state, which boasts significant oil, the dominant sector in the young country’s economy. Oil production has slipped by a fifth since the conflict broke out three weeks ago.

The rebels’ other main stronghold is Bor, the capital of Jonglei state, where fighting continued on Wednesday. Lul Ruai Koang, military spokesman for the rebels, said its forces had attacked government troops near the town.

Awaiting command
Mr Koang said his troops were near the capital, Juba, and would await a command from the rebels’ political leaders to attack if peace talks broke down. “We are ready, and once we are told what to do we’ll get into action,” he said.

In Juba, government military spokesman Philip Aguer said there had been fighting around Bor and elsewhere, including the Upper Nile state, where some oil fields are located. The lack of progress in the peace talks in Addis Ababa, Ethiopia, has rattled world powers, who warn of all-out civil war. The negotiations are deadlocked over a rebel demand to release 11 detainees who were arrested last year over an alleged coup plot.

On Wednesday, the government proposed to shift the peace talks to the UN compound in Juba, enabling the detainees to attend the negotiations during the day and return to custody in the evening. “They [the rebels] seem to have rejected that,” South Sudan’s presidential spokesman, Ateny Wek Ateny, said.

Taban Deng Gai, the head of the opposition delegation at the Addis Ababa talks, said Juba was not a good venue. “I don’t think that will be accepted from this side because Juba is a big prison,” he said.

The rebels, led by South Sudan’s former president Riek Machar, initially demanded the release of the detainees before the talks, but have since agreed to negotiate a ceasefire.The fighting is the worst in South Sudan since it won independence from Sudan in 2011 in a peace deal that ended one of Africa’s longest civil wars. – (Guardian service)