Rise in violent protests ahead of South African general election 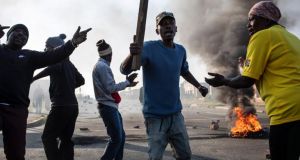 South Africa is experiencing a spike in violent street protests across the country’s poorest communities in the run-up to May’s general election.

From run-down settlements in Johannesburg and Cape Town to rural townships across the nine provinces, impoverished residents are blocking streets, burning tires and vehicles and clashing with police to get the authorities to take notice of their plight.

Mike Hamac from Khayelitsha, a large township near Cape Town that witnessed violent service delivery protests on April 11th, told The Irish Times residents were sick of living in squalor 25 years after the end of apartheid.

Protests are erupting in towns and rural communities across the country, and, in some instances, they have already turned deadly

“We want our communities’ basic needs addressed,” he said. “The apartheid system of keeping black people in poverty is still playing out here. Thousands of people still use ‘bucket toilets’ [a basic form of dry toilet] and have to share a single tap for water”.

The 51-year-old said the protests in Khayelitsha were likely to occur again because residents knew politicians listened to the poor only when they needed their votes.

Another high-profile protest also unfolded in early April in Johannesburg’s Alexandra township. Here residents blocked access to the community for days, obstructing the roads with burning tires and rocks to secure face-to-face meetings with top politicians.

For now, the “total shutdown has been suspended by protest leaders, who await feedback from national and provincial politicians they met with to discuss their complaints”.

Alexandra resident Crecia Kaapu (25) believes the protests that brought her community to a standstill are rooted in the fight over the area’s scarce resources.

“The shutdown is a response to foreigners getting housing in Alexandra before South Africans, so it is a fight over resources,” she said, “The people leading the protest are acting now because the elections are close, so they believe they have some power.”

The Democratic Alliance (DA) party, which governs Johannesburg in collation with other opposition parties, has accused the African National Congress (ANC) of inciting violent protests as part of its campaign to retain power in the hotly-contested Gauteng province.

As the May 8th polling day draws closer, protests are erupting in towns and rural communities across the country, and, in some instances, they have already turned deadly.

Since late March at least eight people have been killed in violence linked to pre-election tensions. Two people from Soshanguve township outside Pretoria were shot dead in on April 11th when service delivery protesters began to loot shops, according to police.

The United Nations high commissioner for refugees has confirmed receiving reports of the murder of at least six foreigners in late March by armed mobs around Durban, in KwaZulu-Natal Province.

The South Africa-based African Diaspora Forum and Human Rights Watch has told the authorities the Durban attacks are linked to political tensions around the elections, and warned foreigners are being targeted in the run-up to the poll.

A new study by risk analysts Eunomix that measured South Africa’s social, economic and governance performance over the last 12 years reveals just how far the country has regressed under former president Jacob Zuma, who was ousted from power in February 2018 over allegations of mismanagement and corruption.

The company’s index of security, governance, prosperity and welfare indicators shows South Africa fell to 88th out of 178 nations in 2018, from 31st in 2006. The size of the drop is surpassed only by those recorded for conflict-affected countries such as Venezuela, the Philippines and Mali, according to Eunomix.

Such research suggests South Africa’s poor have every reason to protest, but why is violence so central to their demonstrations?

Institute for Security Studies protests monitor Lizette Lancaster says that during apartheid oppressed South Africans viewed violent demonstrations as a legitimate and effective way to oppose the government of the day, and many still see them as such.

“Poor people believe they are only heard when they disrupt society. When this is coupled with local politicians taking up their grievances and mobilising them to advance their own agendas, the outcome is often volatile,” she said.

Research polls point to an ANC victory in this year’s general election by a slim majority.

But the party is at risk of losing control of Gauteng and the north-west provinces, and is struggling to resonate with voters in the DA-ruled Western Cape, which means the electoral stakes have never been higher for the ANC in the post-apartheid era.

When all these factors are taken into consideration, Lancaster believes there is a good chance the protests will increase in the weeks ahead.

“Indeed, different communities will see the success the residents of Alexandra have had in getting politicians to engage with them, and some of these will likely mobilise too,” she said.

However, Lancaster concluded that people should not automatically assume that the explosion of protest action means the ruling ANC is facing a massive backlash at the polls.

“In many instances the protesting is a way for people to air their grievances without changing their vote. They do not want a change in government, rather, they want the ANC to keep its election promises,” she maintained.

1 Covid-19: Two-week quarantine period for arrivals into State could be lifted for some
2 Irish planning for no-deal Brexit to restart as EU-UK talks go badly
3 The momentum behind calls to ease lockdown may become irresistible for politicians
4 Miriam Lord: Taoiseach is trapped in a Zoom session from hell
5 Emily Maitlis thanks BBC viewers for support after Cummings row
Real news has value SUBSCRIBE