Former US vice president Joe Biden has officially announced his candidacy to run for the White House in 2020. Video: Joe Biden 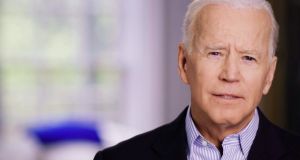 Former US vice-president Joe Biden in a still from the video announcing his candidacy for 2020. He leads Bernie Sanders, his nearest rival for the Democratic nomination, with support from 27 per cent of voters compared with 20 per cent for the Vermont senator. Photograph: Reuters

Joe Biden, the former US vice-president, officially launched his campaign for the White House on Thursday, becoming the 20th contender in a record field of Democrats hoping to topple Donald Trump in 2020.

Mr Biden ended months of speculation by announcing he was joining the race to to be the Democrats’ candidate in a video on Twitter.

“The core values of this nation ... our standing in the world ... our very democracy ... everything that has made America – America – is at stake. That’s why today I’m announcing my candidacy for President of the United States, ” he wrote.

The former six-term Delaware senator added in the video: “If we give Donald Trump eight years in the White House, he will forever and fundamentally alter the character of this nation ... Who we are. And I cannot stand by and watch that happen.”

Mr Biden, who has previously failed to win the Democratic presidential nomination twice, joins a Democratic field that has eclipsed the record 17 Republicans who ran for president in 2016. One person familiar with his decision said Mr Biden would hold a fundraising event in Philadelphia on Thursday evening, adding that he would hold his first political rally in Pittsburgh on Monday before heading to the early voting states.

Mr Biden enters the race with the longest CV of any contender and strong name recognition. The former vice-president leads Bernie Sanders, his nearest rival, with support from 27 per cent of voters compared with 20 per cent for the Vermont senator.

Kamala Harris, the California senator, and Pete Buttigieg, the Indiana mayor, were at 8 per cent respectively, followed by Massachusetts senator Elizabeth Warren on 6 per cent and former El Paso congressman Beto O’Rourke at 4 per cent.

Mr Biden’s fans say the Irish-American son of a Pennsylvania steelworker is the ideal person to challenge the president, pointing out that his humble background and strong union support would help the Democrats win back some of the working-class white voters who left the party to support Mr Trump in 2016. That would help in rust-belt states, such as Michigan, Wisconsin and Pennsylvania, that helped Mr Trump beat Hillary Clinton.

The core values of this nation… our standing in the world… our very democracy...everything that has made America -- America --is at stake. That’s why today I’m announcing my candidacy for President of the United States. #Joe2020 https://t.co/jzaQbyTEz3

Welcome to the race Sleepy Joe. I only hope you have the intelligence, long in doubt, to wage a successful primary campaign. It will be nasty - you will be dealing with people who truly have some very sick & demented ideas. But if you make it, I will see you at the Starting Gate!

“To win the White House back in 2020, we need the candidate who gives us the best chance to win back Pennsylvania. I believe that’s Joe Biden,” said Brendan Boyle, a congressman from Philadelphia.

Mr Trump responded on Twitter to Mr Biden’s announcement, saying: “Welcome to the race Sleepy Joe. I only hope you have the intelligence, long in doubt, to wage a successful primary campaign. It will be nasty – you will be dealing with people who truly have some very sick & demented ideas. But if you make it, I will see you at the Starting Gate!”

Mr Biden faces the most diverse group of Democrats at a time when some say the party should not pick an older white man as its nominee. The race includes a record six women, three African-Americans, a Hispanic man and an Asian-American man. It also boasts the first openly gay contender in Mr Buttigieg, who is just under four decades younger than Mr Biden.

Critics also say that Mr Biden is out of step with younger, more progressive Democrats who want to move away from the centrist positions that he has espoused. Even some friends who believe that he has the experience and gravitas to beat Mr Trump worry that he will struggle to win the nomination for a range of reasons – including his age, his propensity for gaffes and questions about his behaviour around women.

Mr Biden has already been forced to answer questions after several women accused him of touching them in ways that made them uncomfortable. Supporters say he has always been physical with people – part of his “Uncle Joe” charm - but others counter that he needs to understand that a way of behaving that might have been accepted by some in the past is unacceptable in the #MeToo era.

Ms Warren has said that she believed the first accuser, a woman named Lucy Flores, and that “Joe Biden needs to give an answer”.

The former vice-president said he recognised that times had changed and he had to change his behaviour. But he then sparked anger by later joking about the allegations in a speech to electricians, saying he had received “permission” to hug the union leader who had introduced him.

Mr Biden may also face a challenge fundraising. He will join the race with no cash, meaning he will have to play rapid catch up with many of his rivals, including some who have generated big amounts from donors already this year.

Larry Sabato, a politics professor at the University of Virginia, said Mr Biden would give “form to a formless and very large candidate field” and help shape the debate as the party gears up for the election.

“With 44 years in national politics, Biden can help the other Democrats find their own place in the campaign and the evolution of the Democratic party,” said Prof Sabato. “The alternative is to have a flavour of the month each and every month, with many voters concluding the Democrats aren’t ready to reassume power . . . Whether he becomes the nominee or not, this is the most valuable function Biden can perform.”

Mr Biden is running for the third time after failing to win the nomination in 1988 and 2008. In 1998, he dropped out before the Iowa caucuses – the votes that kick off the nominating contests – following allegations that he had plagiarised part of a speech by Neil Kinnock, a British politician. In 2008, he quit after winning less than 1 per cent of the votes in Iowa – a result that prompted Mr Trump to label him “one per cent Joe”.

John Kasich, the Republican former governor of Ohio and a friend of Mr Biden, said the former vice-president was a strong candidate who would not be intimidated by Mr Trump, but joked that the former senator was long-winded.

“I know the guy really well and he’s a lot of fun,” he told CNN. “But I gotta tell you, he does talk a lot. I got on an airplane with him in Washington, and said ‘Joe, how you doin?’ And when we landed in New York, he finished.” – Copyright The Financial Times Limited 2019