Kenya says it has killed al-Shabaab’s head of intelligence 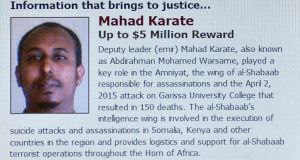 A screenshot posted on the US Department of State website shows a portrait of Al-Shabaab’s head of intelligence Mahad Karate, next to a €5 million bounty. Kenya’s army said on Thursday it had killed Karate. Photograph: Tony Karumba/AFP/Getty Images

Kenya has killed the commander of an elite unit within Somalia’s al-Shabaab Islamist insurgency, a man blamed for masterminding a deadly attack on a Kenyan military camp in southern Somalia last month, the Kenyan military said on Thursday.

But al-Shabaab said the commander was still alive.

Kenyan troops, working under the African Union Mission in Somalia, killed Mohamed Karatey, al-Shabaab’s deputy commander and head of intelligence, at a graduation ceremony for insurgent fighters on February 8th, the Kenya Defence Forces said in a statement.

“It is believed Karatey played a major role in the recent attack on KDF troops in El Adde by the deployment of his suicide bombers,” KDF said in a statement. “His killing now adds to that of the killing of Abdi Dek, the operation commander of the Abu Zubeyr Brigade that carried out the attack in El Adde.”

The statement gave no further details on the alleged killing of Karatey but said the Kenyan military had also killed 42 al-Shabaab recruits and 10 other mid-level al-Shabaab commanders during the raid.

It was not possible to independently verify the statement.

Kenyan troops took heavy losses when al-Shabaab launched a dawn raid on their camp in El Adde near the Kenyan border on January 15th, although they have not disclosed exact casualty figures.

Al-Shabaab claimed the attack had killed more than 100 soldiers. The Islamist insurgents have links to al-Qaeda and seek to overthrow Somalia’s weak Western-backed government and drive out the African Union soldiers supporting them.

Al-Shabaab has inflated casualty figures in the past, while other official estimates often play them down.