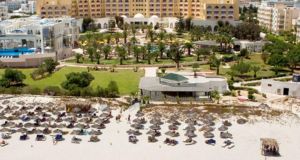 A file image of the Imperial Marhaba hotel in Tunisia which is one of the two hotels attacked by terrorists on Friday.

An Irish woman has described how she grabbed her two sons and ran for their lives when they heard gunfire near a hotel in Tunisia.

She was speaking after at least 27 people were killed in an attack on a beach near two tourist hotels in the Tunisian resort town of Sousse.

The Tunisian interior ministry says there are six nationalities among the dead.

Elizabeth O’Brien said: “We were on the beach, my sons were in the sea and I just got out of the sea.

“It was about 12 o’clock and I just looked up about 500 metres from me and I saw a (hot air) balloon collapse down, then rapid firing, then I saw two of the people who were going to go up in the balloon start to run towards me.

The mother of two from Dublin said she had initally thought the noise was gunfire but when she saw people running she became concerned.

“So, I thought: ‘Oh my God, it sounds like gunfire’, so I just ran to the sea to my children and grabbed our things and as I was running towards the hotel, the waiters and the security on the beach started saying ‘run, run run!’ and we just ran to our room, which is like a little bungalow.”

“So we are actually trapped in our room,” Ms O’Brien told RTÉ radio news.

Ms O’Brien said the Irish consul in Madrid, Spain, had called her to say it was a terrorist attack in the hotel next door and told her to stay where she was.

“My travel agent told me to go to the reception to speak to the rep, but I’m afraid. I’m stuck in the room with my two sons, not knowing what’s going on,” she said.

The Department of Foreign Affairs said it is investigating if any Irish citizens have been caught up in the attack.

At least one Irish tour operator - Sunway Holidays - provides holidays to Tunisia but it is unclear at the moment how many Irish nationals are on holiday in the country.

Sunway Holidays offers ones of the hotels where the attack took place as accommodation to tourists traveling from Ireland, said it had “no update”.

A spokeswoman said the company was still awaiting information.

Asked if she could rule out the possibility that Irish people currently in Tunisia on packages sold by the company were staying in the hotel, the spokeswoman said: “We have not comment”.

The British Foreign Office said it is aware of the reports of the attack and was investigating.

Sousse is a city on the east coast of Tunisia, about 140km south of the capital, Tunis.

Around 1.2 million tourists visit Sousse every year, drawn by the hotels, sandy beaches and culture. Thomas Cook, which has holidaymakers in the resort, said: “Thomas Cook has been advised of an incident that occurred earlier today in Sousse,Tunisia.

“At this time, details are not clear as to which property(ies) have been affected, with conflicting news reports. “We are currently gathering information and will provide an update as soon as possible. Our teams on the ground are offering every support to our customers and their families in the area.”