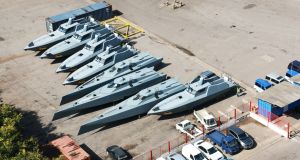 International efforts to help resource-rich Mozambique avoid a massive sovereign debt default are under way following the recent arrival of an International Monetary Fund team tasked with resolving a crisis that is crippling the southern African nation.

The June 16th-24th IMF mission is in response to revelations in April that Mozambique secretly took out government-guaranteed loans of more than $2 billion (€1.8 billion) from international banks for state-owned maritime and security companies.

The IMF and 14 foreign donors, that supply direct budgetary support to the nation, including Ireland, have suspended all instalments pending the outcome of the IMF mission, which is being undertaken to get to the bottom of how and where the money was spent.

Ireland has delayed making its €6 million aid contribution for 2016, according to a diplomatic source, who said the Irish Government’s next step would only be taken after the IMF mission was finalised.

According to South Africa’s Institute for Security Studies (ISS) the $2 billion loans were secretly guaranteed in 2013 and 2014 by the previous government under president Armando Guebuza. They were primarily from Credit Suisse, but also the Russian VTB bank.

The loans were short term, so concerns arose among donors that foreign aid may be diverted to help repay the money once it became due.

Furthermore, a coalition of 26 Mozambique civil society groups said last week that because $1.86 billion of the loans were illegal, breaching a law requiring borrowing and guarantees longer than a year to be approved by parliament, they should not be paid.

The coalition has also called on those responsible for the scandal to be held accountable in the courts.

Opposition parties are calling for the former president’s arrest and the attorney general has launched a number of investigations.

According to ISS, “the harbour facilities in Maputo and Pemba, which MAM was supposed to build, have not materialised”. However, sources close to the ports’ developers say the sites in Pemba are up and running, but are still awaiting customs clearance for equipment and materials associated with the development.*

ISS also says that Ematum, which was budgeted to catch $18 million of tuna a year, last year caught just $450,000 worth.

It has since emerged that $500 million of the loans has been spent on defence equipment rather than maritime, and the cash has been rerouted to the government’s defence budget.

Mozambique’s cash-strapped government has been hit hard by the crash in commodity prices despite the country’s impressive economic growth rate. This has been reflected in a sharp devaluation of the local currency, the metical.

Reuters news agency reported that diplomats in Maputo were not optimistic that the IMF mission would be successful.

This is likely to fuel inflation, which is already at 18 per cent, and increase discord in a country that is struggling with internal conflict dating back to the brutal civil war that decimated its post-independence.

If Mozambique does default, the development would come just a decade after international creditors wrote off more than $6 billion of loans to the country under the Heavily Indebted Poor Countries initiative.