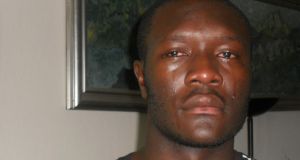 Laurent Xavier Balla, an openly gay rights activist with the Association for the Defence of Gays and Lesbians in Douala, Cameroon, after he was attacked for the fourth time over his sexual orientation. Photograph: Reinnier Kaze/AFP/Getty Images

Homophobia is reaching dangerously high levels across Africa, with attacks on homosexuals increasingly more visible and discrimination against them on the rise, an Amnesty International report has warned.

The report, Making Love a Crime: Criminalisation of same-sex conduct in Sub-Saharan Africa, provides a comprehensive look at the frequency and type of discrimination faced by lesbian, gay, bisexual, transsexual and intersex (LGBTI) people in Africa. As well as facing the danger of physical violence, more and more of Africa’s gay communities are being threatened by the legal system and their own governments.

Many of the laws used to persecute homosexuals were inherited from the colonial era, Amnesty says. US religious groups who “actively fund and promote homophobia in Africa” exacerbate the situation.

Homosexuality, is now criminalised in 38 of the African Union’s 54 member states.

In Mauritania, Sudan, northern Nigeria and southern Somalia, those found guilty of homosexuality already face execution. And worryingly, over the last five years Uganda, South Sudan, Burundi, Liberia and Nigeria have also tried to further criminalise homosexuality within their borders.

“Uganda has seen repeated attempts since 2009 to introduce the Anti-Homosexuality Bill – a Bill which would seek to impose the death penalty for ‘aggravated’ homosexuality, and which would criminalise anyone in Uganda who does not report violations of the Bill’s wide-ranging provisions within 24 hours to authorities,” the report says.

In Cameroon, people are frequently arrested after they have been denounced to the authorities as being gay or lesbian. Some of those accused of same-sex conduct have been imprisoned for three years without trial or charge.

Even in countries where criminalisation is not strictly enforced, the existence of laws provide opportunity for abuse, including blackmail and extortion, by police and the public.

In Kenya, human rights activists say police sometimes threaten to arrest them to obtain a bribe. Extortionists also use the existence of laws criminalising LGBTI people to demand money in exchange for not revealing private details to the media, community or police.

Clare Byarugaba, a Ugandan human rights defender, said in her country politicians and religious leaders were driving an anti-homosexual agenda that had spread throughout rural and urban communities.

“People in Uganda are in general very tolerant, but politicians and religious leaders are preaching anti-gay sentiment to further their own agendas. Many communities now keep a vigil against gay and lesbian people and report those they think are gay to the police.

“Politicians deliver anti-gay sentiment as a way to deflect their own failings when it comes to service delivery and improving people’s lives,” she said.

In many of the 16 African Union countries where homosexuality is not illegal, discrimination and violence against members of the gay community continues to be widespread.

Murders
South Africa has one of the world’s most progressive constitutions, which protects the rights of minority groups. But Amnesty has documented a persistently high number of rapes and murders against the LGBTI community there.

Between June and November 2012 at least seven people, five of them lesbians, were murdered in what appears to be targeted violence.