Militants reported to have travelled in convoy of about 10 vehicles 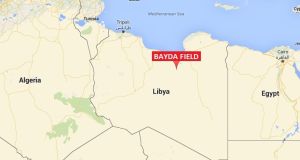 Two guards were killed in an attempted attack on an oil field in eastern Libya by suspected Islamic State militants on Saturday, a guards spokesman said on Saturday night.

Ali al-Hassi said guards had repelled the attack on Bayda field, about 250km south of the major oil terminals of Es Sider and Ras Lanuf. A security official from the nearby town of Maradah said the militants were in a convoy of about 10 vehicles.

Militants loyal to Islamic State have carried out repeated attacks in the area, but have not taken control of any oil facilities.