Dozens of Kenyan soldiers killed in attack on Somalia base 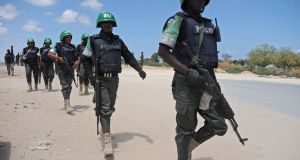 Islamic extremist rebels have attacked a base for African Union troops in southwestern Somalia, with dozens of Kenyan soldiers reported to be killed.

The al-Shabab militant group said at least 63 soldiers were killed, and Kenya’s president Uhuru Kenyatta described the loss as heartbreaking.

The attack happened in the town of El-Ade, not far from the Kenyan border. Kenya has provided a major contingent to the AU force which is fighting al-Shabab and assisting the elected government of Somalia.

Al-Shabab spokesman Abdiaziz Abu Mudan said on the group’s online radio that at least 63 soldiers were killed in the attack.

Ahmed Hassan, speaking from the nearby town of Elwak, said the attack started with a suicide car bomb, and then heavy gunfire as militants stormed into the base.

Despite being pushed out of Somalia’s major cities and towns, al-Shabab continues to launch deadly attacks across the Horn of Africa country.

The group, which has ties with al-Qaeda, has also carried out many deadly attacks inside Kenya. – (PA)