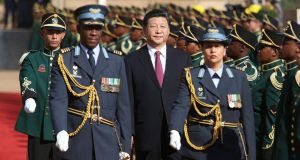 Western hegemony of African economies looks set to be further reduced in the decades ahead following a weekend announcement that China will assist the continent’s future development – to the tune of $60 billion (€55 billion) – through 10 priority programmes.

The unprecedented development partnership was unveiled at the China-Africa summit in Johannesburg by Chinese president Xi Jinping. It was welcomed by his South African counterpart, Jacob Zuma, who said the continent fully supported this higher level of engagement.

“This is a significant amount,” said Zuma at the close of the Forum on China- Africa Cooperation (Focac) summit. “It clearly illustrates China’s commitment to ensure that China’s development takes place in conjunction with the developing countries of the south‚ particularly those in Africa.”

Since Focac first began in 2000, Chinese investment in Africa had reached just over $30 billion by the end of last year, data shows. But few observers had predicted the scale of the assistance package, given the recent slowdown in China’s economy.

The initiatives identified for cooperation over the next three years are three primary bottlenecks stalling Africa’s development: lack of infrastructure‚ skilled personnel and finance.

They focus primarily on increasing industrialisation‚ infrastructure and agricultural development‚ finance‚ the green economy, and poverty eradication, as well as trade and investment facilitation.

There are initiatives that also address issues such as people’s general well-being public health‚ peace and security, and cultural exchanges.

The latter effectively means that some of China’s previous loans to African nations under earlier Focac development initiatives will be written off.

The global downturn in oil and metal prices has left many African countries struggling, as the export of these resources is the cornerstone of their economies. Repaying these loans has become increasingly difficult for many governments.

Zuma said the latest round of Focac assistance meant there was still hope that African development could stay on course despite economic problems adversely affecting the local trade outlook and investment flow.

Xi, who co-chaired the summit with Zuma, said China and Africa needed to strengthen their coordination and collaboration in an effort to make the global governance system more just and equitable for all.

“China will continue to stand up and speak for Africa at the United Nations and other international forums to support Africa in playing a greater international role,” he said.

Zuma noted that China had recently made a pledge in the UN General Assembly to support peace and security in Africa using African solutions.

Few doubt that the continent’s increased support for China’s global agenda will be needed in return for any backing it provides to the region. Aside from African support on the global stage, China receives greater access to African markets and resources in return for its assistance.

To date, Chinese interaction in Africa has primarily been limited to trade and investment. That may change in the years ahead, with Xi saying that China was ready to play “a constructive role in promoting political settlement of Africa’s hot-spot issues”.

Indeed, Chinese peacekeepers are conducting on-the- ground peacekeeping operations in South Sudan, where they were deployed last year to bolster UN efforts to end the civil war there.