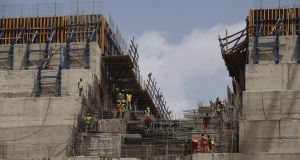 Ethiopian workers on the Grand Renaissance Dam near the Sudanese-Ethiopian border. The $4.8 billion (€4.5bn) project will provide not just Ethiopia with power but also allow the exporting of energy to neighbouring countries. Photograph: Zacharias Abubeker/AFP/Getty Images

Is Addis Ababa falling down? On first view the city appears tumbledown with half-finished buildings, deserted roadworks, no pavements and battered corrugated fencing. Pedestrians, with or without loads on their heads, weave in and out of the traffic as cars, buses, minibuses, trucks and carts jostle for space. There are hardly any traffic lights, and even then they are ignored.

But beneath this aura of dusty demolition lies a story of a strong city striving to be the best city in Africa in five years. Look around and you will notice the half-built skyscrapers are covered in bentwood scaffolding and work is being down with little or no heavy machinery. There are a few still cranes on the skyline, and if you listen you will hear the sound of work being done by hand.

The first city suburban light-rail system is almost complete and will cover 32 kilometres. It will relieve the rush-hour queues for the battered blue-and-white shared minibuses. There is public transport but it is overwhelmed by the volumes of workers. Addis Ababa is an office city, where thousands of people work in the Brussels of Africa, the African Union.

On March 23rd, the leaders of Egypt, Ethiopia and Sudan signed a significant document about consultation for the sharing of the Nile waters. Ethiopia, an energy-poor country, has begun building the biggest hydroelectric dam in Africa, the Grand Ethiopian Renaissance Dam.

The $4.8 billion (€4.5 billion) project will provide not just Ethiopia with power but also allow the exporting of energy to neighbouring countries. When in full production, the dam will be capable to providing 6,000 megawatts of power a year. Access to cheaper power overcame Egypt’s long-standing objections to the project. The dam will also form a huge lake, at least 1,800km square. Funding for the dam is coming from various sources: taxes, bonds, aid and loans.

Ethiopia has come a long way since the drought of 1983-1984 – in fact people are reluctant to talk about the famine. More than half the population are under 25 and it is not even a memory for them. Poverty continues to be a big problem and it is most obvious in rural areas. However, access to education has improved dramatically and it is surprising to meet so many young people who speak very good English. The language is taught in school from first class and, by their teens, most children will speak it very well.

On a visit to Lalibela, site of the Christian rock-hewn churches, we were besieged by children looking for pens and wanting to practise English. They hustled about the dusty roads in plastic shoes using an empty water bottle as a football. There are an overwhelming number of people walking the roads, carrying water, just moving from place to place.

For anyone who saw Dare to be Wild by filmmaker Vivienne de Courcy in the Jameson Dublin Film Festival last month, the scenery around Lalibela will be familiar. The film about Irish gardener Mary Reynolds, who won a gold medal at the Chelsea Flower Show, was partly shot at an extraordinary restaurant, Ben Abeba.

Perched on a hill, the restaurant is the brainchild of Scottish home economics teacher Susan Aitchison, who relocated here seven years ago, and local man Habtamu Baye. Designed by two Ethiopian architects, the building spirals upwards, casting off terraces at different levels to capture views. Reynolds designed a Celtic-themed terrace for the restaurant. Kevin Thornton, the Michelin-starred chef, is a regular visitor to this area. He is involved in the Connect Ethiopia project, which provides mentors for local communities, and has been known to cook in Susan’s kitchen.