Taoiseach's comments 'a cop out' 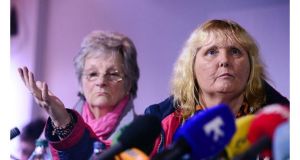 Taoiseach Enda Kenny’s response to the Magdalene laundries report is a “cop out”, a group of survivors has said.

The report itself showed there was still “denial” about the profits the religious congregations made from the unpaid labour of the women who worked in them, she added.

“Those comments from Enda Kenny are a complete and utter cop out,” said Steven O’Riordan of the Magdalene Survivors Together.

He said the Taoiseach was “so sneaky and so quiet” about dealing with the banking crisis and if he put as much effort into the Magdalene report as that “maybe we would get the results that we require”, he added.

The group were looking for the State to give a full apology and pay back wages and pensions to women who worked in the laundry, Mr O’Riordan said. They also wanted the religious congregations to pay compensation, he added.

The group has looked at taking a case against the State and Catholic Church but would prefer for the “State to do the right thing”.

The report said just over 10,150 were put in Magdalene laundries and this was “far less significant figure than what we imagined originally, which was 30,000”, said Mr O’Riordan. But there were also 11,000 women which there was insufficient information included in the laundries’ registers, he added.

The report was “comprehensive” and “damning” and was “not only an embarrassment for the Government and the church but the whole of Irish society”.

“For the first time in the history of the Magdalene institutions we have a comprehensive report which shows the true extent of the State’s role with regard to these asylums,” he said.