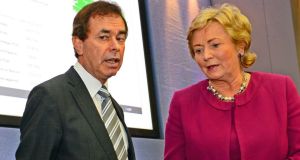 Former minister for justice Alan Shatter and his successor Frances Fitzgerald: said he was “very disappointed” that Ms Fitzgerald appeared to be opting for a “shorter Bill ” on immigration. Photograph: Eric Luke/The Irish Times

Former minister for justice Alan Shatter has claimed a move by the Government to “fragment” his Bill to reform immigration laws and improve the wellbeing of thousands of undocumented migrants is a “fundamental mistake and error”.

Mr Shatter also said it had been his intention, had he remained in office, to announce a scheme for undocumented migrants in Ireland that would have been largely in line with that of which US president Barack Obama recently outlined for the undocumented Irish in the United States.

The Fine Gael TD was speaking from the audience at the launch of new research by the Migrant Rights Centre Ireland on undocumented migrants. He said one of his “big frustrations” upon leaving office was the failure to publish “very comprehensive” legislation in relation to immigration, residency and asylum.

“Unfortunately, despite enormous work done within the department, there was gridlock in the Attorney General’s office,” he said. “It was overwhelmed with demands for legislation, some of which had to be prioritised.”

Mr Shatter said he was “very disappointed” that his party colleague Minister for Justice Frances Fitzgerald appeared to be opting for a “shorter Bill ”.

“Unfortunately, the Bill I thought I would see published at least 18 months ago was on the back-burner waiting to be dealt with,” he said. “There was also great pressure to try and fragment that legislation and deal solely with the asylum issue and not deal with the very important reforms needed in the immigration area. I was concerned if we dealt with the asylum area alone, we would never see the comprehensive Bill that is needed.”

Mr Shatter said the “shorter Bill” dealt with issues “that really demand to be dealt with in the asylum area, but which will not deal with overall immigration reforms which are badly needed”.

He said the preparatory work in the department was “essentially complete”. “My concern is these issues won’t be addressed during the lifetime of this Government and I think that’s a fundamental mistake and error.”

He also said it had been his intention to bring a proposal to Cabinet to address the issue of undocumented migrants, who, he said, were marooned in a “grey area”. “It would be an awful cruelty to bring about a situation, which is unrealistic anyway because of the numbers, whereby they would be deported from Ireland,” he said. “It’s not going to happen in practical terms.

“I would hope the Government will follow the route I intended to follow. I’ve no assurance yet that that will happen.”

Mr Shatter said a structure was needed that clearly set out the circumstances in which undocumented people working in the State for a reasonable period of time “can have their situation regularised”.

The issue could not be approached from a split level, urging humanity and a certain approach in the United States and closing “the door to that type of approach in Ireland”.