Residents urge Government to engage with complaint on housing conditions 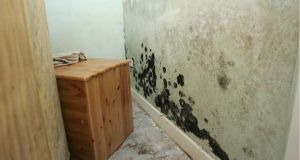 A home in Tor na Rí, Balgaddy, Lucan in 2011 showing damp and cracks. Mary Cooney who has lived in Balgaddy for eight years said nothing had improved since she spoke to The Irish Times in 2011. Photograph: Dara Mac Dónaill

Residents from 20 local authority estates in Dublin, Cork and Limerick, who say poor housing conditions breach their human rights, have urged the Government to engage positively with a “collective complaint” they have taken to Europe.

At a press conference in Bluebell, Dublin on Tuesday, adjacent to Dublin city council housing included in the complaint, residents from areas such as Balgaddy in Clondalkin and Dolphin House in Rialto, said persistent problems with damp, mould, sewage and inadequate heating were violated their rights under the Revised European Social Charter.

Their complaint has been lodged on their behalf by the Paris-based International Federation of Human Rights Organisations and deemed admissible by the European Committee of Social Rights in Strasbourg. The Government has until May 28th to respond.

The residents, who gathered evidence over the past five years with the help of Community Action Network, the Free Legal Advice Centres and the School of Law at NUI Galway, say they pay rent, pay taxes and “deserve our homes to be at a standard that is fit to live in”.

They say their right to health, the rights of their children to appropriate social, economic and legal protection, their right to protected against poverty and the right to non-discrimination have all been violated by their housing conditions.

Mary Cooney, who has lived in Balgaddy for eight years – and who spoke to The Irish Times in 2011 about persistent damp and mould problems – said nothing had improved.

“My sittingroom ceiling is still leaking and full of black mould to this day. Every time someone from South Dublin County Council comes to look they patch things up, tell us to open the widows, not to dry clothes inside and to wash the mould off the walls with bleach – totally blaming us for the conditions.”

A spokesman for the council said there was “no systemic problem in Balgaddy but rather one of lack of ventilation. We fixed each and every one of the problems reported to us and would continue to do so.”

Noeleen Blackwell, director of FLAC, called on the Government to take the complaint seriously.