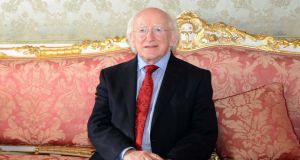 The history of the Sisters of Mercy is a long and very proud one, the President Michael D Higgins has said. File Photograph: Eric Luke/The Irish Times

The history of the Sisters of Mercy is a long and very proud one, the President Michael D Higgins has said.

“Here in Ireland the Sisters of Mercy through their work have long been woven into the very fabric of our society. In fact, at one time the Sisters were so visible on our streets, visiting the sick and engaging in other works of care and compassion, that they were known as the ‘walking nuns’,” he said.

“And, of course, many of our citizens owe their early education to the Sisters of Mercy, while generations of Irish citizens have been profoundly grateful to the Mater Hospital, founded by the Mercy order here in Dublin, for the excellent care they or their loved ones have received there over many years.”

Speaking in Dublin yesterday at an event to mark 20th anniversary celebrations of the Mercy International Association, he said the Sisters had “travelled to remote and challenging environments, teaching, administering to the sick, and working relentlessly to relieve poverty and suffering” and were “now active in 42 countries around the world.”

Irish missionaries “have long been to the fore in ensuring that linkages are created and the voices of the most marginalised are heard – be it at local, national or indeed global levels,” he said.

“Nationally, it is widely recognised that Irish missionaries led the way for much of what the Irish Government, through Irish Aid, is now doing in the area of development assistance. The partnership with missionaries is of real importance in the achievement of our Government’s overseas development objectives,” he said.

Globally,he said, “associations such as Mercy International have a key role to play, particularly during the critical period ahead as negotiations intensify on the development of a new international development framework post-2015.”