Drumcliffe clergy told musician ‘one of the kindest . . . faithful servants of the church’ 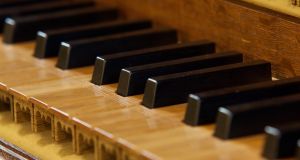 Annie West has condemned “a recent instruction” from rector Isaac Hanna that as soon as the organist is married he is no longer welcome at Drumcliffe or Munninane churches.

A former Church of Ireland warden at Drumcliffe, Co Sligo, has written an open letter to the rector and local bishop there protesting at the recent removal of an organist, after 20 years service, following his same-sex marriage.

In her letter to Rev Isaac Hanna and Bishop of Kilmore, Elphin and Ardagh Ferran Glenfield, Annie West “emphatically and utterly” condemned “a recent instruction from rector Isaac Hanna that as soon as he is married, John [a pseudonym] is no longer welcome to come and play the organ at either Drumcliffe or Munninane churches because as rector he feels uncomfortable with this”.

The decision had apparently been made “unilaterally”, without any consultation with the local congregation, she said.

Rev Hanna, archdeacon of Elphin and Ardagh, is rector of Drumcliffe, Lissadell, and Munninane in Co Sligo. Piped music is currently being used at services in the churches.

It is understood that, for personal reasons, neither John nor his husband, who were married in a civil ceremony on October 27th, wish to comment on the matter.

In her letter, Ms West claimed the decision had discriminated against “one of the kindest and most generous, faithful servants of the church in the most inexplicably cruel way”.

She recalled how her grandmother had played the organ in Drumcliffe church “all her life” and that, latterly, John had “played in Drumcliffe and Munninane unstintingly every Sunday for 20-plus years . . . Sunday after Sunday, funerals, weddings and special occasions as rectors came and went, died, fired or retired”.

In her work as church warden, she said she used hear him practise for hours. “He told me he always felt he could do better and that practice makes perfect.”

He had “always been and continues to be one of the kindest and most generous people I know”. She was “very proud to say” John and his partner were her friends.

It is understood the first John knew of the instruction from Rev Hanna was when the archdeacon visited his home on October 11th. The matter was discussed further at a local vestry meeting with Rev Hanna on October 22nd.

In a statement, the diocese said Bishop Glenfield would meet the rector and select vestry of Drumcliffe and Munninane parishes in the coming week.

“The bishop wishes to encourage a spirit of dialogue in the meeting so that views can be expressed and heard. The Church of Ireland encourages parishes to use a process of pastoral reconciliation in the first instance to resolve difficulties and, always, to conduct pastoral processes in a spirit of respect for one another’s humanity.”

1 Covid-19: Public urged to ‘stay at home’ as 1,025 further cases confirmed in State
2 Transmission of Covid-19 on flight into Ireland linked to 59 infections
3 Man (21) charged with breaking into a house armed with an axe
4 US election: ‘Donald Trump needs to go. White America got what they want’
5 Two hundred Irish retailers for all your online Christmas shopping
Real news has value SUBSCRIBE