Forbidding eulogies at funerals ‘harsh’, according to Dublin’s Catholic archdiocese 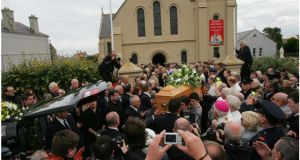 The funeral of Ronnie Drew in 2008. One angry letter writer to The Irish Times was enraged “to see that Ronnie Drew had a ‘send-off’ like no other, complete with a congregational rendering of Weela Weela Wallia”. Photograph: Bryan O’Brien

Guidelines to counter the “dumbing down” of Catholic funerals issued by the Bishop of Meath appear to contradict those from the Archdiocese of Dublin.

Guidelines for the conduct of funerals from Dr Michael Smith were circulated in the Meath diocese at the weekend. They said there should never be “any kind of eulogy” and families should reserve tributes for the cemetery or family gatherings. But a document by Rathgar parish priest Fr Joe Mullan published on the Dublin archdiocese’s website on May 29th states that while the church’s Order of Christian Funerals forbids eulogies, it seems to have been referring to them replacing the liturgical homily.

“To forbid someone speaking seems unnecessary to me, harsh even; why not allow one of the community to speak about the deceased and the way in which their life was God’s gift to the world,” it said. “The length of the address, the choice of person to deliver it and the general tone can all be discussed often with some pretty firm guidelines laid down.”

Fr Mullan said the most contentious item is often the choice of music for the liturgy.

“From time to time the so-called ‘favourite song’ is requested with a strength that suggests that to demur would be a grave affront to the family. Okay, so be it, either find a place for it, suggest an alternative or put the priestly foot down and explain that you are very uncomfortable with that choice. You win some, you lose some, that’s life,” he writes.

Background
It’s August and there’s a time for everything under heaven. Including the “ban on eulogies” story.

In 2000 Catholic primate and yet-to-be cardinal Seán Brady made the position clear. According to the church’s manual for conducting funeral rites, “a brief homily based on the readings should always be given at the funeral liturgy, but never any kind of eulogy”, he said. “Requests by members of the family to speak after the prayer after Communion should be firmly but sensitively refused,” he added.

In a letter to his priests he suggested a eulogy might be delivered “at the graveside, at the meal afterwards or in columns of the local newspapers”.

There have been regular reminders from other Catholic bishops since.

But the issue came back spectacularly to the fore in August (of course) 2008 after Ronnie Drew’s funeral. One angry letter writer to this newspaper complained how the previous year his family had been “absolutely refused” permission to have some of their father’s favourite music played at his funeral Mass or to have a short tribute at its end.

He was “enraged therefore to see that Ronnie Drew had a ‘send-off’ like no other, complete with a congregational rendering of Weela Weela Wallia, and all presided over by an auxiliary bishop of Dublin. Perhaps celebrity ensures an appropriately robed bishop as chorus master.”

In 2010, following the funerals of Bob Geldof snr and RTÉ presenter Gerry Ryan, one letter writer claimed both deceased men were afforded “bespoke” services by the Catholic Church.

She said she had been refused permission to deliver a eulogy at her mother’s funeral a short time beforehand and was also told that a favourite song her mother had chosen “could not be sung by the soprano I had engaged”.

“If you want a funeral that goes to the terminus of your dreams, then make sure you are rich, powerful, a celebrity or closely related to one,” she wrote. “Meanwhile the ‘little people’ will be told exactly where to get off.”

But pity the undertakers. One said, off the record, yesterday that he had heard just three decent eulogies this year. The rest were “boring, awful”.

He’d ban the lot of them.