Column: Savita Halappanavar’s death was not caused by confusion about the law 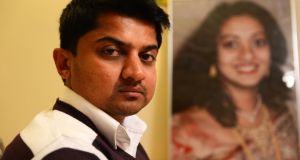 Praveen Halappanavar with a photograph of his late wife, Savita: there were deficiencies in her care but none is likely to have caused her death. Photograph: Cyril Byrne/Irish Times

The fractious deliberations of Government Ministers on the draft legislation on abortion are largely irrelevant to the legal regime on abortion in Ireland that led directly to the death Savita Halappanavar at University Hospital Galway on Sunday, October 28th last.

It was not confusion about the existing law on abortion that led to her death, or contributed to it, nor did she die as a result of any inadequacy in her treatment at that hospital – although there were certainly many inadequacies.

This emerges from the report of Peter Boylan, consultant obstetrician and former master of Holles Street maternity hospital, on the circumstances leading to the death of Savita Halappanavar.

Peter Boylan was invited by the coroner at Savita Halappanavar’s inquest to review the case notes, charts, statements of witnesses and transcripts of evidence at the inquest and make observations.

There was nothing abnormal about Savita Halappanavar’s pregnancy up to Sunday, October 21st, 2012, when she visited University Hospital Galway at 9.35am complaining of back pain – she was due to give birth to a girl on March 30th, 2013.

She had suffered back pain for several years previously, so, understandably, no particular significance was attributed to the pain she complained about on October 21st. She was reviewed by the senior house officer and discharged home. Peter Boylan observed: “Her management at this time was entirely appropriate”.

She returned to the hospital on the same day, this time at 3.30pm, saying she “felt something coming down”. She was reviewed by the registrar on duty, and it was observed she was very likely to have a miscarriage. She and her husband were distressed. A blood count taken after her admission showed an elevated white cell count with an elevated neutrophil count (neutrophils are a type of white blood cell that fights infection). This suggested, according to Peter Boylan, the “possibility of an infection (but) the site of the infection was not clear”.

During the following day, Monday, she remained stable and there was no evidence of infection. Peter Boylan observed: “There was nothing to indicate that Ms Halappanavar’s life was in danger.”

On the following day, Tuesday, October 23rd, the consultant obstetrician, Katherine Astbury, noted that Savita Halappanavar was upset and that she enquired about a termination of her pregnancy by precipitating her miscarriage. Katherine Astbury explained to her the legal situation in Ireland: that a termination of pregnancy could take place only where there was a risk to the life of the mother, as distinct from a risk to the health of the mother.

Risk to life
At 4.45am on Wednesday, October 24th, Savita Halappanavar complained of “feeling cold and shivery”. She was “shivering and her teeth were chattering with the cold”, a midwife recalled. Extra blankets were given to her and her husband, who had stayed with her throughout the ordeal, as “the room was noted to be cold”. Peter Boylan observed: “Although an identifiable organism was not present at the time, it is reasonable to presume that Ms Halappanavar had developed sepsis overnight (and) therefore there was a developing real and substantial risk to her life”. (Sepsis is a potentially fatal medical condition characterised by a whole-body inflammatory state caused by severe infection).

There was a significant delay in the hospital’s medical staff responding to this development, in part because of a concern that the termination of pregnancy be authorised by a senior medical person. At 3.15pm the miscarriage occurred spontaneously. Subsequently, Savita Halappanavar was moved to the high dependence unit where she died the following Sunday morning.

Peter Boylan says that, on the balance of probabilities, Savita Halappanavar would be alive today had there been a termination of her pregnancy on Monday, October 22nd or Tuesday, October 23rd, when she requested termination. But “termination of pregnancy at that time . . . was not a practical proposition because of the law”.

He went on to observe: “Given the fact that Ms Halappanavar became critically ill over a short period of time, it is unlikely, on the balance of probabilities, that intervention to terminate her pregnancy, from approximately 9.30am onwards (on the morning of Wednesday, October 24th) would have made a difference to the eventual outcome”.

Cumulative effect
He cited several deficiencies in the care of Savita Halappanavar but concluded: “There are a number of deficiencies in care . . . none of which, on their own, is likely to have resulted in Ms Halappanavar’s death. Cumulatively, however, they resulted in a delay in appropriate treatment for several hours, and it is well known that each hour of delay in appropriate treatment increases the mortality rate by 6 per cent. Nevertheless, I think there is a strong argument that even if appropriate intervention had commenced in the early hours of October 24th, the outcome would not have been any different.

“The real problem was the inability to terminate the pregnancy prior to Ms Halappanavar developing a real and substantial risk of death. By that time it was effectively too late to save her life.”

And the real problem, politically, is that there is no willingness to take the hard moral decision on abortion – nor compulsion to do so, because of the easy escape route: Liverpool.