Over 50,000 march in Dublin to protest against water charges 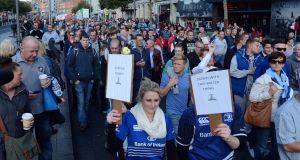 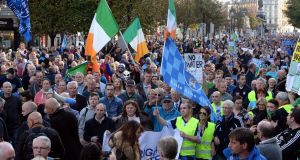 Upwards of 50,000 people marched against water charges in Dublin today in one of the largest demonstrations seen in the capital in years.

While the Garda press office could not give a figure for the numbers in attendance, one garda observing the march estimated they could be as high as 100,000.

There was huge anger directed at Taoiseach Enda Kenny, as well as the Labour Party and at Tánaiste Joan Burton in particular for her comments during the week that anti-water charges protesters all seemed to have expensive mobile phones. A number of people carried placards with pairs of tin cans strung together attached, with slogans such as “My little phoney, Joaney” while one man was dressed as an iPhone. Other placards said:“Sold out by our own Government”; “Stick your water meters up your arse” and “Can’t pay, won’t pay”.

A number who spoke to The Irish Times, said the water charge was “the last straw”.

“Enough is enough,” said Kathleen McWilliams, a woman in her 50s from Artane.

“The property tax was bad enough but I have nothing left to give.”

There was also anger directed at the media which many protesters said had been agnoring anti-water meter protests around the country.

Among the chants were, “Enda in your ivory tower, this is called people power” and “From the rivers to the sea, Irish water will be free”.

One man was distributing plastic water meter hub caps which he said could be used to ensure a household’s water supply while others were handing out leaflets advising people that Irish Water did not have a legal right to force people to sign a contract with them, could not pursue money from people’s wages and could not cut off people’s water supply.

The Garda presence was low key, with small numbers standing some distance back from the march mainly on streets adjacent to the route.

Before the main speakers, the Resistance Choir sang from the platform and performed their song Now Is The Time For Rage.

Among the speakers was Audrey Clancy, of the Edenmore Says No campaign who urged people neither to fill in their ‘welcome packs’ from Irish Water nor to pay bills when they start arriving.

“We have to have mass non-compliance when these bills start coming in January. No contract, no consent.. We can beat this. We have to stick together. The power of the people is greater than the people in power. Stand up to them,” she said to enormous cheers.

People Before Profit TD Richard Boyd Barrett urged everyone to take selfies and email their photo to Tánaiste Joan Burton.

“Let her wallpaper her office with all the photos of people here. Will we pay the water charges?,” he asked, to which the crowd responded loudly, “No, no, no.” He urged people to take part in planned demonstrations around the State on November 1st.

Independent TD Clare Daly said there were historic days from which point nothing would be the same, and this was one of them.

“The people are here with our mobile phones and our tablets and we’re saying, ‘You are not getting any more blood from these stones’.”

1 Wife not entitled to deceased husband's entire estate, High Court rules
2 President Higgins says British must face up to their history of reprisals
3 Coronavirus: Public health experts considered idea of moving Dublin to Level 4
4 Life in Level 3: What will happen under new restrictions in Dublin?
5 Why are some in Fianna Fáil unhappy with Micheál Martin?
Real news has value SUBSCRIBE