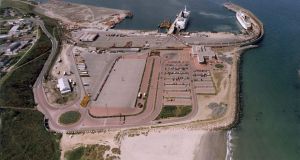 Rosslare Harbour: Chief Supt John Roche says there have been about 25 stowaways discovered at the harbour this year, but only about one-quarter requested asylum.

Three-quarters of stowaway migrants discovered at Rosslare Harbour this year failed to say they were seeking asylum and were sent back to their port of origin, a senior Garda officer in Wexford has said.

Any individual who arrives in the State has a right to seek asylum. The claim is processed and a determination made about whether to grant refugee status.

Five people, including a three-year-old girl, were found in the back of a lorry in New Ross, Co Wexford, at the weekend. They sought asylum in the Republic when they were discovered and will remain in direct provision while their claims are processed.

Chief Supt John Roche told The Irish Times yesterday there have been about 25 stowaways discovered at the harbour this year, but only about one-quarter requested asylum. The others were sent back to their ports of origin.

The number sent back from Rosslare to ports of origin climbs to about three to five per month, Chief Supt Roche said, when account is taken of migrants arriving illegally, including trying to enter with false travel documentation.

“There is a serious market in Europe right now in relation to false travel documents,” he said. “If there’s any suspicion in relation to validity of the documents we will send them back to their port of origin, unless they ask for asylum.

“We are refusing a fair number because people are coming in with false documentation or no documentation at all, particularly as foot passengers. They’re evading capture on the French side but we stop them once they get to Rosslare and return them immediately.

“In some cases, like the group this weekend, they look for refugee status, and that’s being processed at the moment.”

Chief Supt Roche said the Garda had “significantly increased” immigration and security checks at Rosslare in response to the migrant crisis and increased terror threat levels.