Eleven of 12 Irish MEPs vote in favour of measure 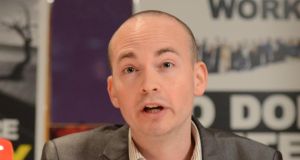 Paul Murphy: said there was a “real attack on the freedom of speech” in Ireland. Photograph: Dara Mac Dónaill

MEPs yesterday called on the European Union to draw up a road map to combat homophobia and protect the rights of lesbian, gay, bisexual, transgender and intersex (LGBTI) people across Europe.

The European Parliament yesterday voted in favour of a report which calls on the EU to implement similar strategies already in place to combat discrimination against people based on sex, disability or ethnicity.

The resolution passed by 394 votes to 176 in the European Parliament, with 72 abstentions. Eleven of the 12 Irish MEPs voted in favour, while Fine Gael MEP Gay Mitchell abstained.

While the proposal is non-legislative, Ulrike Lunacek, the Green MEP from Austria who initiated the report, said it would now put the issue firmly on the agenda of the next European Commission, which will be formed after the European elections in May, and has the power to initiate legislation.

Speaking after the vote, Ms Lunacek criticised what she said was a “cynical, orchestrated lobbying campaign by conservative hardliners” against the report.

Withdrew support
British MEP Michael Cashman alleged many MEPs who had previously supported proposals withdrew their support because of threats that they would be deselected from running again for the European Parliament in May’s elections. They also faced threats that religious organisations would instigate block votes against them, he said. Describing the report as “inoffensive and sensible”, Mr Cashman said that it was “vital that politicians and democracies deliver equality”.

Discrimination
EU citizens are currently protected against discrimination in the workplace on grounds of sexual orientation in EU employment law.

The EU’s Charter of Fundamental Rights also prohibits discrimination based on sexual orientation.

However, Ms Lunacek said further EU action is needed. “Despite EU legislation to protect against discrimination based on sexual orientation and gender identity, there is still discrimination, bullying and violence – in schools, workplaces and in everyday life situations,” she said.

Irish MEP Paul Murphy, who spoke on the topic at the plenary session in Strasbourg, said there was “a real attack on the freedom of speech” in Ireland, referring to RTÉ’s decision to reportedly pay €85,000 in damages to a number of people accused of homophobia.

“It’s an attack by the right-wing conservative forces in Ireland, acceded to by RTÉ, designed to censor debate in advance of a likely referendum on marriage equality. We must refuse to be silenced.

“When the Iona Institute campaign against gay marriage because it is gay marriage, that is homophobia.”