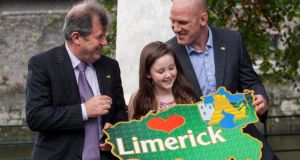 An 11-year-old-girl is hoping her award-winning design will help spread pride in Limerick across the world.

Anna Kinsella, from Rhebogue in the city, was joined by businessman JP McManus and rugby star Paul O’Connell for the official launch of her award-winning lapel pin, which she designed to promote Limerick.

The sixth-class student from St Patrick’s Girls School was among 700 students who entered the “Design a lapel pin” competition, a new category in the Going for Gold Initiative – a campaign aimed at getting communities and businesses in Limerick to clean up the city.

Anna’s award-winning design has been produced as a gold-plated pin, which will be used to highlight the Going for Gold Initiative, sponsored by the JP McManus Charitable Foundation.

“I was so excited when I found out that I had won, and it’s great to have my photo taken with Paul O’Connell and JP McManus,” Anna said yesterday.

More than 200 guests attended the official launch at the Hunt Museum, including the Mayor of Limerick, Cllr Kathleen Leddin, representatives from Limerick GAA and Limerick Football Club, as well as local community and resident groups.

Speaking at the launch, Munster and Ireland rugby star Paul O’Connell said he would wear the pin with pride.

Opportunity
“The lapel gives Limerick people an opportunity to wear the pin and show the pride in where you come from,” he said.

“It’s also an opportunity if someone sees you wearing it at a bus stop or in an airport to have a conversation, and that conversation might drift towards Limerick and you can accentuate the positives of the city and the county.”

Also praising the design, JP McManus said: “When I’m at home or abroad I will wear it and if you meet somebody with one you have something in common to talk about”.