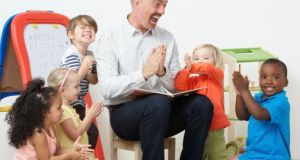 Men in countries such as Iraq, Algeria and the United States contributed more of their time to childcare than Irish men,

Just seven per cent of unpaid childcare in Ireland is done by men according to a new report which describes the country as having the most unequal gender responsibility for looking after children.

Men in countries such as Iraq, Algeria and the United States contributed more of their time to childcare than Irish men, who finished bottom of the pile out of 37 nationalities surveyed as part of a major research project carried out by the Overseas Development Institute.

In a report titled ‘Women’s Work: Mothers, Children and the Global Childcare Crisis’, researchers from the British-based think tank found that 93 per cent of childcare in Ireland is done by women, compared to a 63:37 female-male split in Sweden, which was regarded as the most equal country.

Ireland also compares unfavourably to nearest neighbours the UK, where men take on 32 per cent of the responsibility when it comes to looking after children.

The results were collated from a series of 2015 surveys carried out on behalf of the United Nations Development Programme, which were circulated to a representative sample of over 1,000 Irish men and women who were asked to specify how they spent their free time.

Early Childhood Ireland’s director of policy Dónall Geoghegan described the uneven split as “shocking” and urged the State to provide more supports in order to alleviate the burden being placed on women.

“It is shocking and it’s a big wake up call for us all. If we are to get beyond the cultural factor we need to look at what the State does in terms of parental leave, paternity leave and the provision of childcare,” he told The Irish Times, making particular reference to the lack of State-sponsored childcare options for under 3s.

National Women’s Council of Ireland director Orla O’Connor was less surprised with the results, but echoed calls for government to do more to address inequalities.

“That’s what we know from what our members our telling us,” she said. “It is about government taking leadership and saying we need to have care more equally distributed between men and women, because it is causing one of the main structural gender inequalities in our society.”

A recurring theme across all countries surveyed was that women are being precluded from seeking opportunities outside the home due to their domestic and child-rearing responsibilities.

“We see these inequalities in every country for which we have data, so what this really suggests is that women aren’t having the same choice as men,” said researcher Emma Samman.

The report also illustrated the lack of adequate and affordable childcare facilities available to parents in developing countries, where millions of infants are being left unsupervised or in the company of older siblings for long periods.