In defence of the low-tech loom band craze

Opinion: The real ‘smart’ action is the art of making something 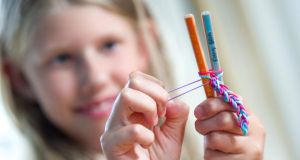 “Loom bands do not demolish buildings, evoke prostitution, or invade sovereign states. This is a good thing.” Photograph: Tobias Hase/EPA

Irish parents probably never thought a mechanical engineer who emigrated to Michigan from Malaysia would have a large impact on their lives. But Cheong Choon Ng did what many parents coming to the end of the long summer holidays will be grateful for: he kept their kids busy. By inventing Rainbow Loom, the brand name for loom bands, in just two years, Ng has gone from obscurity to the creator of one of the most popular toys in the world.

I was watching my niece make them recently, with the efficiency and prowess of a world-champion oyster shucker. She impatiently gave me a lesson until they started pinging off the plastic pegs and I was admonished and relieved of bracelet-making duties.

There are inevitable concerns. Phthalates, sometimes found in plastics and beauty products, may be found in uncertified versions of loom bands, of which there are plenty.

Earlier this month, Lucy Siegle wondered in the Guardian whether loom bands were “a litter time bomb”, but perhaps they can be used as an exercise to encourage children not to dispose of them carelessly, considering other articles have pointed to the potential impact of littered loom bands on wildlife.

There has been a crackdown on loom bands in some schools, apparently, as some teachers display a Miss Trunchbull-style intolerance to fun, and also because some children are distracted by constant loom band-making in class, or arrive at school wearing more loom bands than a near-bankrupt rapper has gold chains, or emulating the Kayan Lahwi tribe with multicoloured plastic bands instead of neck rings or, reportedly as in some New York schools, creating conflict in the playground.

Later, friendship bracelets made of thin yarn became a popular fad, yet they required patience, a missing virtue for many children.

But play, actual hands-on fun, and making, actual creativity, should always be encouraged.

There is also nothing sexy about loom bands, which is a good thing. As far as I can tell from my occasional visits to toy shops to panic-buy birthday presents, children’s toys for girls are a catwalk of anatomically bizarre, heavily made up Lolita monsters with attitude problems, to whom stern Cabbage Patch Kids would probably confront with “you’re not going out dressed like that” remarks if they all came to life after dark.

Boys’ toys seem to centre on the building sector, ignorantly refusing to reflect a much starker economic reality when it comes to property development, or soldiers with bulging crotches and menacing weapons. Loom bands do not demolish buildings, evoke prostitution or invade sovereign states. This is a good thing.

While children seem to latch on to technology with intimidating intuition, play is probably better off technology-free. Technology isolates us and removes us from our surroundings. You have only to bash into someone walking down the street with their head stuck in their iPhone to realise how footpaths, traffic and fellow pedestrians melt away once a text message comes through.

I’ve recently noticed a trend in modern playgrounds introducing high-tech equipment when they’re redeveloped. One such thing is a bulky frame in which panels are pressed in some kind of game, with the scores totted up on a screen. I’m sure these things are pretty expensive, far more expensive than the nearby swings and simple merry-go- rounds and seesaws, which inevitably are way more popular. Meanwhile, Fisher Price got slated for publicising an iPad attachment for a baby’s bouncy chair, as if slotting a screen into a child’s viewpoint is a good idea.

Technology for kids is often referred to as “smart”, but much smarter is the act of making. Hopefully the loom band generation will extend their skills into their later years, and make fools of an older generation that threw things out instead of fixing them.