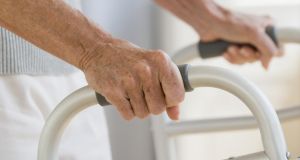 The cuts affect three housing grants: the housing adaptation grant for people with a disability, housing aid for older people and the mobility aids grant.

Further cutbacks in housing grants intended to help elderly and disabled people to continue living at home, rather than going into residential care, have been notified to local authorities this week.

Details of the changes, which affect age and income eligibility levels as well as the amounts payable, are set out in a Department of the Environment circular which says the changes are to be implemented immediately.

Age Action, the charity supporting older people, warned the latest cuts would make it increasingly difficult for some people to remain living at home.

The cuts affect three grants: the housing adaptation grant for people with a disability, housing aid for older people and the mobility aids grant.

Spending on these grants has almost halved over the past three years and the latest cuts come on top of increasing restrictions on older people’s access to Fair Deal nursing home beds, the abolition of their telephone allowance in last October’s budget and cuts to home-help budgets.

“Behind all these cuts are real stories of human misery,” said Age Action spokesman Eamon Timmins.

The housing grant schemes are administered by local authorities and 80 per cent funded by the Department of the Environment.

Its expenditure on them has fallen from more than €80 million in 2011 to about €40 million last year.

According to the circular, from now on the income of all household members over the age of 18 (or 23 if in full-time education) is to be included in means assessments for grants. Up to now, only the income of applicants and their spouses was assessed.

In the case of the housing aid grant for older people, which is to make necessary repairs and improvements such as rewiring or replacing windows, applicants must now be aged at least 66, up from 60, and the maximum grant is to be cut from €10,500 to €8,000.

Under the housing adaptation and housing aid schemes, the number of income bands is being reduced from nine to six and households in the lowest band, with an income of €30,000 or less, who previously were granted 100 per cent of the costs, will now get only 95 per cent.

The upper income limit to be eligible for both schemes has been reduced by €5,000 to €60,000, meaning households with incomes above €60,000 are now ineligible.

The circular also says applicants for the grants must prove they have paid their property tax.

A Department of the Environment spokesman said the cuts were not about saving money but “ensuring the grants are made to the maximum number of people as need them most”.

Mr Timmins said the greatest concern was how the cuts would “make it more difficult for older people and people with disabilities to remain living in their own homes, especially those who are seriously ill or frail”.