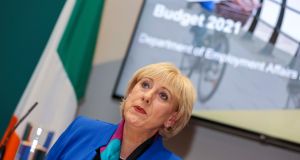 The Pandemic Unemployment Payment now being received by more than 200,000 people will be reviewed in January, Minister for Social Protection Heather Humphreys has said.

While small increases in the living alone allowance and fuel allowance, along with qualified child payments were welcomed, the Minister was criticised by the Opposition for not restoring the PUP payments to their original size.

“It had to be sustainable,” she said. “These were decisions we made. A lot of money is being spent on PUP and the important thing is we have kept it and extended it.” The current rates will be reviewed again in January.

However, the old age pension has not been increased for the second year in a row and the age for eligibility will remain 66.

The payment made for children dependent on adults in receipt of social protection increased by €5 to €45 per week for children aged 12 and over and by €2 to €38 a week for under-12s.

The living alone allowance for older people and people with disabilities will go up by €5 to €19 a week, while the fuel allowance, paid from September to April, increases by €3.50 to €28 weekly. The Christmas bonus will be paid in the first week of December. Those on the PUP for more than four months will get it.

In recognition of the difficulties for those who get work intermittently – such as taxi drivers and artists – and who could not as a result get the PUP, an earnings disregard is to be introduced.

The carer’s support grant is to increase by €150, to €1,850 per year, while parents’ benefit will be increased by three weeks.

The Department of Children, Youth Affairs and Equality is getting an additional €120 million, a 6 per cent increase.