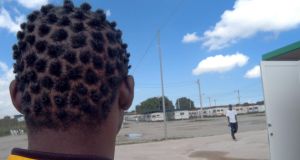 A group of asylum seekers have said they were protesting over delays in the processing of their asylum status, and also complained about conditions at their accommodation centre. File photograph: Getty Images

A group of protesting asylum seekers who claimed to be on hunger strike at an accommodation centre in Co Limerick have been transferred to other asylum hostels, management at the privately operated Mount Trenchard centre said today.

Speaking at the centre, a management source said the men had been “removed” after they attempted to prevent staff from gaining entry to the direct provision centre yesterday.

The group said they were protesting over delays in the processing of their asylum status, and also complained about conditions at the accommodation centre.

A management source said gardaí­ were called to the centre yesterday after the group of five men caused a disturbance.

According to migrant organisation Doras Luimní, one of the group was given a Garda escort this morning to a temporary accommodation unit in Limerick. The protesters were transported to hostels in Limerick City and Cork, the management source confirmed.

“There was a disagreement between the residents and the management. Their issues were not with the centre or the management. They have been waiting for a while for their status. Some of them are here about eight years, some of them five years. That’s just the process. The applications are taking that long. [It is] nothing to do with us,” the source said.

The source said if the men had issues with their asylum status they should take it up with the Department of Justice, which ultimately oversees asylum applications. The source added the group of men had sought transfers out of Mount Trenchard. He said there are currently 57 residents living at the centre, located near Foynes.

Under the direct provision system, asylum seekers receive €19 per week but are not allowed to work. Their unemployed status also makes it harder for them to travel.

Three of the protesters said they have been waiting 10 years for their asylum applications to be processed. One of the group claimed he could not live with his daughter, who lives in Ireland, because he is residing at Mount Trenchard.

The man, who was part of the protest group, said: “We are making a hunger strike until we are going to join our families or die.”

He claimed he had fled certain death in Afghanistan, only to be now living in limbo. Another resident said he had been in the asylum system for the past 14 years.

Doras Luimní­ said it understands some residents have been living at the hostel for the past 12 years. Recent pressure to reform the asylum system has come from the UN Human Rights Committee and the UN Special Rapporteur for Child Protection, who likened the direct provision centres to the scandal of the Irish mother-and-baby homes.

Key issues raised include systemic delays in processing applications and the lack of an independent complaints mechanism.

Doras Luimní­ stated: “The average length of time individuals spend in direct provision is four years, with 25 per cent of asylum seekers spending over six years living in these conditions.”

The organisation called for “an end to the current system of direct provision”, which it described as “an inhumane system where many asylum seekers are kept waiting for a decision for eight years or more”.

An official statement from the Mount Trenchard centre has been requested.