Bones, dug up by a badger outside burial tomb, date back at least 4,500 years 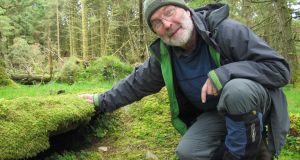 Séamus Ó hUltacháin at the site in Cavan where human remains were dug up by a badger. Photograph: Rodney Edwards 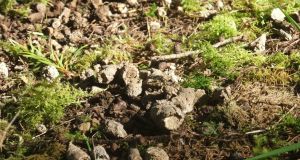 Human remains dating back 4,500 years have been discovered by a local historian in Blacklion, Co Cavan after they were unearthed by a badger.

They came across a fresh dig by a badger near a collapsed tomb, along with 14 small pieces of cremated human bone and charcoal flecks in the soil.

“Our badger just threw out the bones,” said Mr Ó hUltacháin. “They were no bigger than my nail, just scraps of bone. It is the oldest discovery in this region, a wonderful discovery.”

At 124 hectares, Cavan Burren Park is regarded as one of the finest integrated prehistoric landscapes in Ireland, featuring historical monuments, megalithic tombs, hut sites, prehistoric rock art and echoes of a dead sea dating back 350 million years ago.

The bones were found outside one of the collapsed ancient tombs in the park, which is now covered in vegetation and moss. They were buried about a foot deep from the level of the soil.

Removing archaeological material is prohibited by law. However, as they were under threat of disappearing, the bones were rescued and the National Museum was immediately informed.

Following analysis, one of the larger bones, part of a femur, was sent to Queen’s University in Belfast for carbon dating. It has now been discovered to date to circa 2438-2200 BC.

1 Pricewatch: Left on the shelf - what we are no longer buying
2 Ireland’s coronavirus restrictions may lift more quickly if case numbers keep falling
3 Coronavirus: 35,600 people come off unemployment payment after return to work
4 Tax on Covid-19 payment could cause 'terrible shock' late in year
5 Dominic Cummings controversy: The unanswered questions
Real news has value SUBSCRIBE