Adi Roche set to be awarded Freedom of Cork city

Founder of Chernobyl Children International has represented Cork ‘with distinction’ 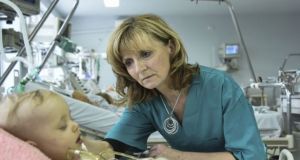 Adi Roche with baby Victoria Doronona in the cardiac unit of Kharkiv general hospital, eastern Ukraine, in 2015. Ms Roche is set to be nominated for the award in the coming weeks by Cork’s Lord Mayor.

Adi Roche is expected to be awarded the Freedom of Cork city later this year for her work in assisting the people of Chernobyl following the nuclear disaster of 1986.

Ms Roche who is a native of Tipperary, is set to be nominated for the award in the coming weeks by Lord Mayor of the city, Cllr Chris O’Leary.

Cllr O’Leary, who accompanied Ms Roche on a recent trip to Chernobyl, has described the charity worker as “a person of the highest calibre who has been representing Cork and Ireland with distinction for 30 years.”

Chernobyl Children International (CCI) has raised over €100 million for some of Chernobyl’s tens of thousands of children, whose lives have been saved, prolonged or improved through CCI’s efforts to address the long-term medical and social effects of the unprecedented nuclear catastrophe in Chernobyl in 1986.

Last November, Ms Roche was honoured with the World of Children Award for her campaigning work for the victims of the nuclear disaster.

She was one of six humanitarian campaigners who were honoured with the award, sometimes described as “The Nobel Prize for Child Advocacy” – at a ceremony in New York. Ms Roche was honoured “for having dramatically improved the lives of children around the world”.

In 2010 Ms Roche received the World of Children Health Award for pioneering Irish funded “Flying Doctor” missions to Ukraine where leading international cardiac surgeons have carried out lifesaving operations on 3,500 children with the condition known as Chernobyl heart.

Ms Roche will join a distinguished list of recipients of the Freedom of Cork city, which includes US presidents Woodrow Wilson and John F Kennedy, as well as Irish presidents Eamon de Valera, Mary Robinson and Mary McAleese.