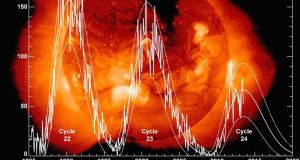 The sun is acting bizarrely and scientists have no idea why. Solar activity is in gradual decline, a change from the norm which in the past triggered a 300-year-long mini ice age.

Three leading solar scientists presented the very latest data about the weakening solar activity at a teleconference yesterday in Boulder, Colorado, organised by the American Astronomical Society. It featured experts from Nasa, the High Altitude Observatory and the National Solar Observatory who described how solar activity, as measured by the formation of sunspots and by massive explosions on the sun’s surface, has been falling steadily since the mid-1940s.

The sun goes through a regular 11-year cycle with a maximum, when sunspot activity is at its peak, followed by a minimum when sunspot numbers are reduced and are smaller and less energetic. We are supposed to be at a peak of activity, at solar maximum.

Outside the norm
The current situation, however, is outside the norm and the number of sunspots seems in steady decline. The sun was undergoing “bizarre behaviour” said Dr Craig DeForest of the society.

“The sun’s current maximum activity period is very late and very weak, leading to speculation that the sunspot cycle itself could be shutting down or entering a dormant phase,” he said before the teleconference.

Irish solar science specialist Dr Ian Elliott, formerly of the Dublin Institute for Advanced Studies, quoted from figures released by Nasa on July 1st. It had asked an expert group to predict sunspot activity using models, with an upper limit and a lower limit.

The predictions suggested the monthly average sunspot total should range between 90 and 140, but in fact the present monthly average is only 67, Dr Elliott said. A typical average at maximum during much of the early 20th century was about 200.

“It is the smallest solar maximum we have seen in 100 years,” said Dr David Hathaway of Nasa. We are currently in solar cycle number 24 which is about half as active as cycle 23, but cycle 25 is likely to be smaller again due to changes in the magnetic flux on the sun’s surface,” he said.

Dr Giuliana de Toma of the High Altitude Observatory acknowledged the clear signs that solar activity was in decline but this did not mean the earth was heading for another “Maunder Minimum”. This was a time between 1645 and 1725 when solar activity was extremely low or nonexistent, a situation which caused a mini ice age.

The fall-off in sunspot activity still has the potential to affect our weather for the worse, Dr Elliott said. Research by Prof Mike Lockwood at the University of Reading showed how low solar activity could alter the position of the jet stream over the north Atlantic, causing severe cold during winter months. This was likely the cause of the very cold and snowy winters during 2009 and 2010, Dr Elliott said.

“It all points to perhaps another little ice age,” he said. “It seems likely we are going to enter a period of very low solar activity and could mean we are in for very cold winters.”

And while the researchers in the US said the data showed a decline in activity, they had no way to predict what that might mean for the future.