Residues found in 6,000-year-old pot help explain what was on the menu 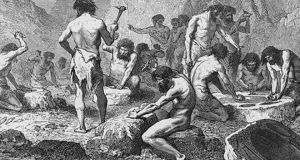 During the Stone Age, a group of men hammer at rock in order to manufacture flints. Photograph: Kean Collection/Getty Images

You’d be forgiven for thinking that spices came to Ireland with the arrival of Uncle Ben or Celtic Tiger foodies. However, it now appears that flavourings were used in prehistoric cuisine in northern Europe, long before Masterchef or Marco Polo’s trek on the spice trail.

That is according to new research, carried out at the University of York and published in the journal PLOS ONE, which has found spice residues inside Danish and German cooking pots that are over 6,100 years old. What’s more, the cooking of prehistoric settlers in Ireland may well have also been more adventurous than previously thought, according to an Irish expert in experimental archaeology familiar with the research.

Garlic mustard has little nutritional value, and the shards also contained residues of fats from a range of marine and terrestrial animals, as well as starchy plant foods, suggesting the spice was used to flavour these foods.

The samples date from a period in the Stone Age when prehistoric people transitioned from a hunter-gatherer lifestyle to farming.

“Until now it has been widely accepted that the calorific content of foods was of primary importance in the decisions by hunter-gatherers about what to eat. Both the actual finding of seed phytoliths consistent with garlic mustard spice, and the method of discovery, open up a new avenue for the investigation of prehistoric cuisines”, says the lead author Hayley Saul.

Commenting on the findings, Irish researcher, Dr Jessica Smyth, who is an organic chemistry and archaeology expert now based at Cardiff University, said “Pottery is a very resilient archaeological artefact and a mine of information. Analysis of plant phytoliths is an interesting and potentially exciting way to look at prehistoric cuisine.”

There was “a similar chance” of such samples surviving and being discovered in Ireland, she added, particularly as Irish soils tend to be acidic and preserve specimens very well. “It’s just a question of looking for them.”