That’s Maths: This year’s International Mathematical Olympiad takes place in Colombia next week – and you thought you had problems 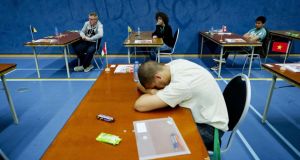 Every year bright young students from around the world compete in solving tough mathematical problems. The 54th International Mathematical Olympiad, or IMO, will be held in Colombia next week and a team of six Irish students will be there to take part.

The IMO was originally confined to the Soviet bloc, the first contest being held in Romania in 1959. Now it is worldwide.

The goal is to stimulate interest in mathematics and give the best young people an opportunity to demonstrate their talents at an early stage. About 100 countries enter teams, and several IMO winners have gone on to become highly creative mathematicians. Contestants must be aged under 20, and not yet registered in a university.

The problems in the IMO would certainly pose serious challenges for you and for me. Although they are written in the language of secondary school mathematics, solving them requires concepts, ideas and techniques well beyond the experience of typical students. Contestants need to practise intensively if they are to have any chance of success. The questions cover algebra, combinatorics, geometry and number theory. No knowledge of calculus is required.

No calculators
The examination is held over two consecutive days, with one paper of three questions each day. No problem appearing in a text book or in a previous mathematical competition is ever used. Each problem is worth seven points, so students are aiming for a grand slam of 42 points. Calculators are not permitted in the exams. Scores are given on an individual basis and medals are awarded to the participants with highest marks. Roughly half of the entrants receive a medal. While team scores have no official status, they are widely considered and discussed by leaders.

The selection process for the IMO differs from one country to another. In Ireland, students who do well in the Junior Certificate are offered special training at a number of mathematics enrichment centres at five locations (UCC, UCD, NUIG, UL and NUIM). The training sessions are run by volunteers from these universities and from other third-level institutions (see irmo.ie).

Problem-solving
The emphasis of the training is on problem-solving techniques, and on development of creative mathematical reasoning. This year’s Irish Mathematical Olympiad took place in May, and the results were used to select the six students to represent Ireland in Colombia.

As the leaders know the problems in advance of the contestants, they are kept well away from them. This year, the leaders will be in the city of Barranquilla, a two-hour bus ride from the examination centre in Santa Marta. With miniaturisation of electronic devises, security has become a major headache and it is increasingly difficult to eliminate illicit communication. In 1991, and again in 2010, North Korea was disqualified for cheating. The Irish students travelling to Colombia have worked hard to get there. Best of luck to them.