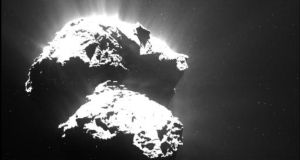 Key building blocks of life have been discovered by a European spacecraft orbiting a comet.

The Rosetta probe found clear evidence of the amino acid glycine, a basic component of proteins, and the mineral phosphorus, which helps build DNA, around the comet.

Scientists are excited by the discovery, which lends weight to the theory that comets “seed” planets with the raw ingredients of life.

Rosetta reached Comet 67P/Churyumov-Gerasimenko in August 2014 after a four-billion-mile journey through space that took 10 years.

The new evidence came from Rosina (Rosetta Orbiter Spectrometer for Ion and Neutral Analysis), an instrument designed to “sniff” the gassy atmosphere surrounding the comet.

While simple organic molecules had already been found around the comet, this is the first time Comet 67P has yielded elements essential to the origin of life on Earth.

Rosetta’s British project scientist Dr Matt Taylor said: “The multitude of organic molecules already identified by Rosina, now joined by the exciting confirmation of fundamental ingredients like glycine and phosphorous, confirms our idea that comets have the potential to deliver key molecules for prebiotic chemistry.

“Demonstrating that comets are reservoirs of primitive material in the solar system, and vessels that could have transported these vital ingredients to Earth, is one of the key goals of the Rosetta mission, and we are delighted with this result.”

The Rosetta mission hit the headlines when a British probe carried by the spacecraft, called Philae, made a bumpy landing on the comet in November 2014.

It was the first time a man-made object had ever made a controlled landing on a comet nucleus.

Philae detected a number of organic compounds in material from the comet’s surface, but it was the orbiter that made the most significant discovery of an amino acid.

Glycine is the smallest of the 20 amino acids that form the protein “alphabet”.

They link together in chains to create proteins, the large molecules that are fundamental to the structure and function of living cells.

Hints of glycine were previously found by the American space agency Nasa’s Stardust mission that took samples from Comet Wild 2 in 2004.

But scientists could not rule out contamination of the particles during their analysis on Earth.

Dr Kathrin Altwegg, principal Rosina investigator from the Centre of Space and Habitability at the University of Bern in Germany, said: “This is the first unambiguous detection of glycine in the thin atmosphere of a comet.”

Details of the research are reported in the journal Science Advances.

Glycine was initially detected in October 2014, and then again in August 2015 during “perihelion”, the time when the comet was at its closest point to the sun.

As the comet approached the sun and warmed up, ices trapped within it evaporated and burst from the surface - a phenomenon known as “outgassing”.

Rosetta was on hand to analyse the escaping chemicals.

Ethylamine and Methylamine, both precursors of glycine, were also identified.

In addition, phosphorus was found in the gaseous “coma” surrounding the comet.

Phosphorus is a mineral used in the body to make phosphate, which is vital to the structure of DNA, as well as cell membranes, muscles, nerves and bones.

Together with sugar, it forms the “backbone” of the DNA molecule.