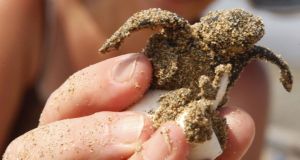 Scientists have developed a robot that mimics the movements of a newborn sea turtle as it struggles across the sand towards water. They hope the “Flipperbot” may aid in turtle conservation by learning more about locomotion on complex and uneven surfaces.

We have all seen the videos - baby loggerhead sea turtles scrambling from their sandy nests and dragging themselves across the beach to get into the water before hungry seabirds gobble them up. The odds are stacked against them given they are dealing with rough, uneven terrain and yet enough survive to keep the species going.

Researchers from the Georgia Institute of Technology and from Northwestern University hope to give the turtles a leg…or maybe a flipper…up by a detailed analysis of turtle locomotion using the Flipperbot. True to its name it doesn’t have wheels or legs to get about, just two flipper-like appendages.

The resultant robot weighs in at just 790g with a flipper-span of about 40cm. Individual servomotors power these forelimbs and they tested the Flipperbot by sending it across a bed of poppy seeds, with high speed cameras capturing all the action. Details of the robot are published this morning in the Institute of Physics journal, Bioinspiration and Biomimetics .

Access to the robot made all the difference given the complexity of analysing live turtles, said Prof Daniel Goldman of Georgia Tech. “Flipperbot allowed us to explore aspects of the sea turtle’s gait and structure that were challenging if not impossible to investigate in field experiments using actual animals.”

Among other things they confirmed that the turtle’s free wrist at the end of the flipper works much better than a fixed wrist because it causes less disturbance to the sand surface. Uneven sand surfaces slow the turtle, making it more of a challenge to get off the beach.

Co-author Nicole Mazouchova of Georgia Tech believes that their new understanding of loggerhead locomotion may help in turtle conservation biology. “Robot modelling can provide us with a tool to test environmental characteristics of the beach and implement efforts for conservation,” she says.